Several Republican lawmakers have reportedly sent a letter to Apple, demanding answers to over a dozen questions, surrounding the tech giant’s decision to slow down older iPhones.

Back in December, Apple admitted to slowing down the speeds of some older iPhones, in a bid to prevent devices shutting down over battery capacity.

Backlash mounted following the announcement, from both lawmakers and consumers alike. Some alleged the company was deliberately slowing down phones in a bid to sell new models.

The new letter reportedly sent on Friday, demands questions from Apple by January 26th, and includes questions on: 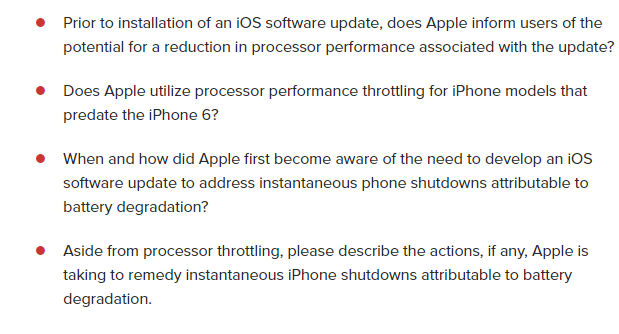 Apple has apologised for the incident and as previously reported, has made amendments to its battery notifications and decreased the price of replacement batteries.

However, Republican lawmakers are “concerned” about “ensuring the integrity of iPhone batteries”. Chair of the Senate Commerce Committee has also reportedly sent a similar letter to Apple on Tuesday.