CSA, formerly known as the Zigbee Alliance, have announced a new global smart home standard named Matter, described as “the interoperable, secure connectivity standard for the future of the smart home.”

Amazon, Apple, Comcast, Google, SmartThings, and what was then Zigbee, started work on Matter in 2019. The alliance has now grown to over 180 member organisations, plus companies such as IKEA, Legrand, NXP Semiconductors, Resideo, Schneider Electric, Signify, Silicon Labs, Somfy and Wulian.

“The proliferation of connected objects continues to change the way we live, work and play,” notes the press release.

“For too long, disconnected platforms and disparate development paths have caused confusion for consumers and complicated processes for developers and innovators.

“Smart objects should be reliable, secure, and work together – this is the shared vision behind Project Connected Home over IP (CHIP), now known as the new standard, Matter.”

The new technology is royalty-free and the CSA promise that any object built on the standard is “reliable by nature, secure by design, and compatible at scale”.

Such a standard will no doubt accelerate the uptake and manufacturing of smart home devices.

“We create marks of trust, and Matter is an important milestone for users in our long history of delivering unifying, secure, reliable and trustworthy standards for the IoT,” said Tobin Richardson, President and CEO of the Connectivity Standards Alliance. “I’m very excited to unveil Matter as a foundational element in delivering a truly connected world.”

The first specification release of the Matter protocol will run on existing networking technologies such as Ethernet, Wi-Fi, Thread and Bluetooth Low Energy.

“Today, millions of customers around the world rely on Alexa as their favorite way to control more than 140,000 Alexa-compatible smart home products, and we are committed to continuing to make smart home connections easier for customers,” said David Shearer, Vice President, Amazon Smart Home.

“With Matter, smart home devices built on technologies like Wi-Fi will be more interoperable, making them simpler for manufacturers to develop and certify, and delivering more value for customers.”

US Brands Apple, Google, Amazon Cuddle Up In Connected Home 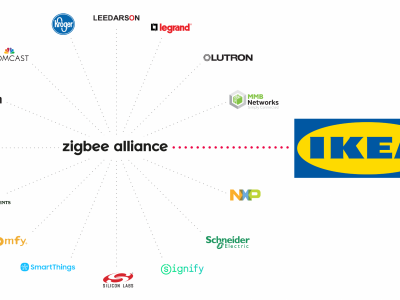