Laser TV Shootout LG Vs Hisense Which Is Best 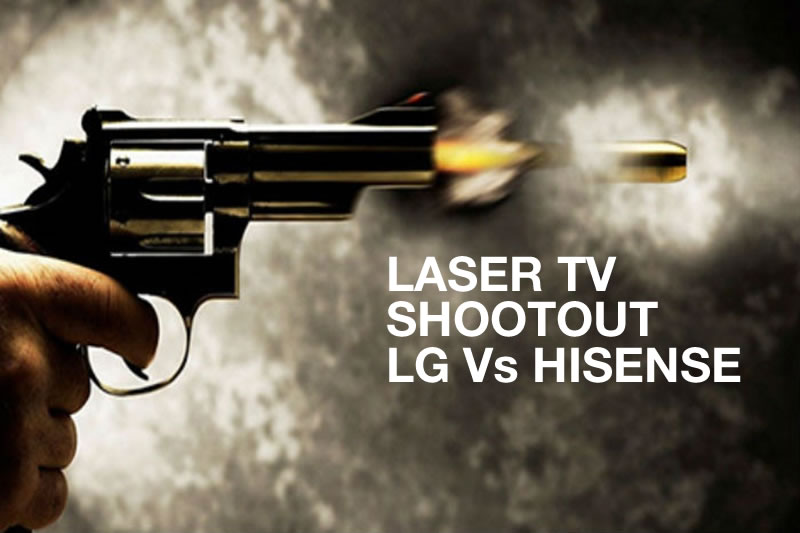 A TV battle with a difference is set to break out in Australia with both Hisense and LG set to go head in an attempt to lure consumers into Laser TV’s as opposed to flat panel TVs, they both deliver 4K and a big screen viewing experience.

The Hisense offering is ugly and is delivered by what is a large black box that has exposed fans while the LG 120″ laser TV content is delivered via a sleek white box that appears to have been designed with aesthetics in mind. Both these two devices deliver content via a short throw projector which project an image onto a screen or wall. In the case of the Hisense projector you have to mount a supplied 100″ screen to a wall in your home to get the best picture while the LG offering can be projected onto a white wall with the projector sitting neatly on a cabinet. The projector delivers 4K resolution with up to 2,500 ANSI lumens. In comparison the Hisense offering is fixed at 100″ due to the supplied screen.

When it came to screen quality the LG projector appeared to deliver a superior image though I was unable to run the same content on both screen. Both LG and Hisense ran preview content. The Hisense projector is a laser-based, single-chip ‘4K’/HDR-capable DLP system.

While the new LG is a dual-laser projector that delivers a more conventional design. It is surprisingly compact and avoids the need for a wide or deep entertainment stand, the Hisense projector is in a massive box that has to be extended and when extended two fans cooling the device are visible. There is also a separate subwoofer and a 10 watt Harman Kardon sound system.

The LG device has five dual watt speakers and LG’s WebOS smart TV interface with ThinQ artificial intelligence and a TV tuner as well as Google Assistant built in with Alexa control available.

The Hisense device has neither Google Voice or Alexa built in.

WebOS makes a huge variety of apps available, including the usual suspects like Netflix, Hulu, YouTube, and Amazon Prime Video. Similar apps are available via the Hisense offering.

With voice commands, users will be able to search for content using natural language and get search results back listing availability and price — even when that price is free.

The 100-inch Hisense offering has been available in other markets in 2018, but not in Australia.

Hisense said that their projector delivers 4K resolution at more than 8 million pixels and supports high dynamic range (HDR10) however Hisense uses light source technology known as X-Fusion which it says uses a dual colour laser light source with an expanded colour gamut. However, in the content that I saw the bright vibrant images seen on the LG laser TV were not being delivered to the Hisense screen.

Conclusion
LG is delivering a superior Laser TV at what will be a lower price. Their physical box looks smarter and the content delivered to a screen is crisp and sharp even at 120″ Vs the 100″ of the Hisense device.

With the Hisense offering you need to mount a screen as per the one supplied and this can look ugly on a wall.