We didn’t quite get a full-on Samsung car at CES 2018, but we did get close to it with a new generation in smart car technology from the Samsung owned Harman called QLED Auto technology.

First up Harman unveiled configurable entertainment, an in-car technology developed on the company’s AudioworX platform. AudioworX is an open platform which allows manufacturers and OEMs to design and implement new user experiences.

This is achieved via the use of a combination of audio processing and visual changes, so in-car speakers can alter their shape and sonic characteristics on demand.

This is a is a new generation of in-car display which uses technology already found in Samsung’s premium televisions. According to Harman CEO Dinesh Paliwal a major European brand has already signed up for the Samsung/Harman jointly developed technology.

The release of Samsung and Harman developed technology was tipped for this year. Samsung chose their CES press conference to release the new platform which was not surprising after $8bn back in 2016 to buy Harman who also make sound gear with brands such as AKG who have jointly worked with Samsung to develop a new AKG sound system which will be shown at CES tomorrow. Harman’s QLED screens will use direct-lit backlight technology with local dimming – Harman claims this will result in increased power savings which, in turn, will help to improve the range and efficiency should of electric vehicles.

The partnership will also see Harman offer transparent and flexible OLED displays to car manufacturers. Samsung’s OLED displays are used throughout the company’s hugely successful range of Galaxy smartphones, including the S8 and Note 8, so it makes sense for Samsung to share this technology with Harman on the back of their relationship.

Touchscreen displays are such an integral part of the in-car experience and if Samsung can offer an experience closer to its mobile phones, then it can only be a good thing for the end user.

Harman, QLED Automotive, Samsung Car
You may also like 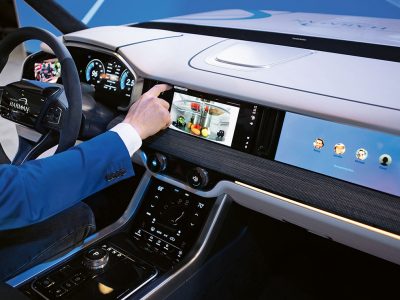