Apple ‘The Dog’ Of Wall Street As Value Crashes $103 Billion 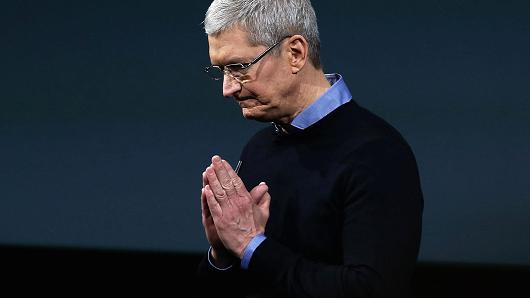 Apple is no longer the darling of Wall Street with investors describing them as the dog that bite them.

The Company who are witnessing a massive sales slump as consumers desert the once glamorous brand, have very little in the pipeline that will generate the revenues that investors have come to expect.

More than $103 Billion has been wiped off the value of Apple recently, with analysts tipping more problems ahead.

Bespoke Investment Group notes that Monday’s negative close marks eight straight sessions in the red for Apple—something that last happened in July 1998, and has now happened only four times in the company’s history.

According to Bloomberg, the company’s heavy weighting in major sector and benchmark indexes, coupled with the stock’s terrible two-week stretch, has made $US4 billion in assets of exchange-traded funds evaporate over this stretch.

“Two of the three eight-day streaks saw the stock fall on day nine as well, but the stock has never experienced a losing streak longer than nine trading days,” Bespoke writes.

Last night Apple revealed its first drop in revenue in 13 years and a decline in iPhone sales, MacBook sales are already down 21%.

At the same time, Twitter shares dived by 12.3 per cent after the social media site reported revenue of US$594.5millon, against expectations of around $607million (£415m).

The company also disappointed investors by forecasting lower revenue than expected for the second quarter of 2016.

Apple recently reported revenues of $50.6billion for the first three months of the year, tumbling by 13 per cent from the year before.

Laith Khalaf, senior analyst at Hargreaves Lansdown said the firm’s “tremendous growth record has finally been brought to an end”.

He added: “In the first quarter the tech giant was hit by economic weakness in key markets, Asia in particular, and the absence of a new iPhone launch to drive sales.

“The end of such a prodigious period of uninterrupted growth will inevitably lead investors to question whether this is a turning point for Apple.”