Peloton Moves On From Fights Over Treadmills To Lululemon Bra’s

Struggling US tech fitness brand Peloton who is trying to roll out an operation in Australia, is back in court again and it’s got nothing to do with their dodgy treadmills, this time it’s all about fitness gear and bra’s.

Peloton Interactive has sued Lululemon Athletica and it’s all about women’s bra and legging products.

Apparently, Peloton has become so concerned about the fall in demand for their expensive treadmills that they have decided to launch their own active clothing line.

The lawsuit was filed in Manhattan federal court last Thursday night 2-1/2 months after Peloton launched its apparel brand following the end of its five-year co-branding relationship with Lululemon.

In early November Lululemon sent a letter to Peloton claiming that would sue Peloton unless it stopped selling its new apparel. When that failed to generate a favourable response, the matter went to court.

Peloton wants a court declaration that it has not infringed Lululemon patents and trade dress, and that Lululemon’s patent claims are invalid.

“At Lululemon we are known for our product innovation and iconic design,” Lululemon said in a statement on Saturday.

“We will defend our proprietary rights, to protect the integrity of our brand, and to safeguard our intellectual property.”

Recently Peloton was forced to issue a safety recall for its Tread+ treadmills, which have been tied to dozens of serious accidents involving children and adults.

Prior to the recall the company that recently cut a deal with David Jones in Australia, had spent weeks fighting with federal safety regulators over how to respond to the accidents.

One child died and other children and adults were injured after being sucked under the treadmill’s rotating surface, according to the Consumer Product Safety Commission.

The move into the Australian market comes as Peloton subscribers have used, they’re at home equipment less and less, dropping from 26 to 16 workouts a month per premium subscription in the space of six months.

This month Peloton shed nearly $11bn in a week in market value after cutting revenue forecasts.

Its shares are down roughly 70 per cent since the start of the year, when it was valued at $49bn.

The company last week announced a $1bn equity raise to increase liquidity having burnt through $650m in its first quarter. 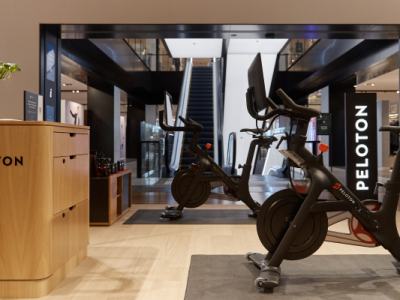 Peloton Launch Own Ad After Sex And The City Death Upheaval