The rumours were right, and the majority of the leaks were spot on, but despite that, Google has still managed to impress with the unveiling of their rebranded Google Nest Mini, a refresh to their Wi-Fi Kit and their first truly wireless earbuds.

The next-generation Pixel Buds 2 is Google’s second attempt at its own wireless headphones, with Bluetooth range promising to cross three rooms indoors or an entire football field of 110 meters.

Priced at USD179 (AU$265), the final price point for Australia will be more than likely be much dearer whenever the arrive in 2020.

The Google Assistant is at the forefront of the truly wireless earbuds, with hands-free access being the main attraction through the always-on assistant.

“On-device machine learning” will also be implemented to refine the Pixel Buds 2 as the project develops.

Promising five hours of battery life with an extended 24 hours in the included charging case, the Pixel Buds 2 offer dynamic volume adjustments depending on ambient noise as well as “noise-isolating” features.

Another project that has developed over the years is Google’s Nest WiFi system, which has been updated to include the rebranded Google Home Mini and a new WiFi Mesh system that doubles as a smart speaker array.

The Nest WiFi will be available in-store in Australia from November 5th, in either a standard two-pack for AU$399 or the larger three-pack with the router for AU$549, and is available for preorder now on the Google Store, JB Hi-Fi, Harvey Norman and the Good Guys.

Google has taken its initial WiFi Kit design of identical mesh nodes positioned throughout the house to include a central router with individual satellite nodes that double as smart speakers.

The Google Nest network shares the load across multiple access points to reduce congestion and improve internet access by up to 25% compared to its predecessor.

The Google Nest WiFi Router connects into your modem at home, and through the Nest WiFi access points, boosts coverage throughout the house.

Each of the Nest WiFi nodes doubles as a smart speaker, allowing the Google Assistant to remain accessible in every room one is positioned. 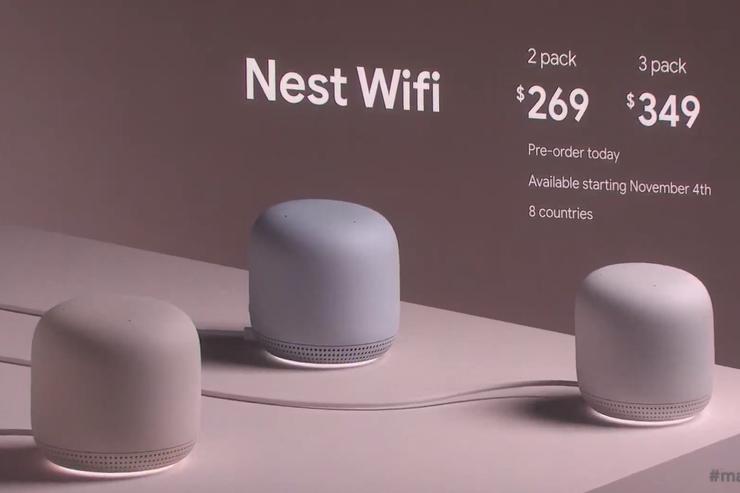 The Nest Mini is available to purchase today from JB Hi-Fi, Harvey Norman and The Good Guys for AU$79 in either Chalk, Charcoal, Coral and Sky.

Delivering bass that’s twice as loud, thanks to new proprietary audio tuning software for better sound production, plus an improved microphone for picking up voice commands in noisy environments.

A machine learning chip has been included in the Nest Mini, which utilises ultrasound sensors to detect when a hand is approaching for faster response times.

Google has laid further foundations for the expansion of its Google Assistant ecosystem, in which they have implemented machine learning to provide in-depth data for software and hardware improvements.

However, the push to have the Google Assistant everywhere in the house even has the Senior Vice President of hardware, Rick Osterloh, a little worried.

In speaking with the BBC, Mr Osterloh admitted to warning visitors that he has smart speakers installed in his house before they enter.

“Does the owner of a home need to disclose to a guest? I would and do when someone enters into my home, and it’s probably something that the products themselves should try to indicate.”

Warnings and indications to visitors and guests that a smart speaker is in operation is something that the Google Nest security camera incorporates by displaying a red light when recording.

Unfortunately as more smart technology invades the home and more aspects of our lives are documented and recorded, steps will need to be taken to regulate and facilitate safety and security for users across all brands and devices.