If there is one area where Sony has delivered a major turnaround it’s in the audio market.

From portable media players to a new generation of headphones the Japanese Company has clawed back sales and is now a major competitor alongside brands such as Sonos, JBL, Ultimate Ears and Philips.

This new range is aimed at a younger more upwardly mobile target audience and the first thing one notices is that the styling is seriously good.

All four of Sony’s 2018 horizontal SRS-XB Bluetooth speakers, including the top-of-the-line SRS-XB41 have already been launched in the US market with retailers such as JB Hi Fi and Harvey Norman set to benefit from the expansion of the Sony offering and the reemergence of the brand in the premium market.

Sony’s new personal audio earphone and speaker designs are driven “by two underlying ideas, great audio performance and how this technology fits into our daily lives,” a Sony spokesperson said. “That’s become a really important point for us.”

One way Sony’s new Bluetooth speakers and earphones fit into an active lifestyle is acknowledging both aesthetic considerations and physical environments. All the earphone and speaker models will be available in a variety of fashionable pastel colors, all include some level of water protection, and the speakers include controllable LED flash/strobe lighting trim.

This is technology that is already found in both JBL and Ultimate Ears speakers.

Leading the Bluetooth speaker introductions is the SRS-XB41. Available in black, white, blue fabric, the XB41 is IP67 waterproof and submersible up to 940 centimetres even in salt water, but you only have 1 minute in salt water.

What is an advantage is the 24 hour battery life. It can not only be recharged via AC or DC, but also provides charging for USB-connected devices such as smartphones.

On the audio side, the XB41 features twin 58mm drivers and a passive radiator; the drivers are angled slightly to enable a wider “live sound mode” soundstage designed to add a DSP at-the-venue feeling. While the XB41, like all these new speakers, is mono, two can be paired to create stereo, and up to 100 can be linked together.

The XB41 also features a “party booster” mode; tapping varying spots on the speaker produces up to 13 different programmable sounds including bongo, drums, bass — even a cowbell.

Includes with the buds are two sizes of “arc support” in-lobe wings and four sizes of silicon tips to ensure a secure workout-proof fit, along with two “ambient sound” modes, one to emphasize “normal” surrounding environmental noise and one to emphasize voice. With a connection to a compatible Android smartphone, the buds also enable voice-access to Google Assistant.

For those with longer continual listening needs, the more traditional behind-the-neck WI-SP600N ($149) offers all the aforementioned SP700N features, but with six hours of playback, while the similar SP500 provides eight hours of playback by eliminating the active noise cancellation, deep bass and ambient sound modes.

All three of these models are available in black, pink/rose, yellow and white. 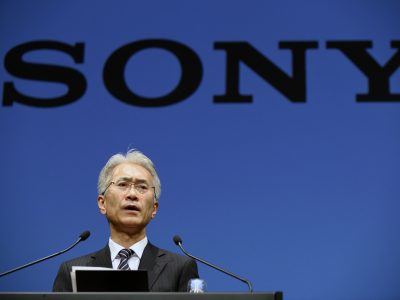 Sony Boss Shrugs Off Break Up Questions Shareholders Not Happy

New Move To Break Up Sony