What’s refreshing about the new 4th generation Amazon Echo is the new design, which is classy and redesigned as a sphere as opposed to a cylinder.

With a product like this I believe women will play an important role in the products success and if the reaction of my wife to the new look is anything to go by this speaker is set to be a big hit.

It appears men are into cylinders similar to the prior Amazon Echo speaker and this is not surprising.

The sphere design of the new speaker appears to blend in better in a shelf or as a standalone design and the speaker is designed so that one can multitask the device as both an audio sound player or as a source for commands for a SmartHouse or simply to get information from the Internet.

There are a number of things that stand out, The (100 percent recycled) fabric mesh finish feels and looks classy and the rubber base which is wrapped around premium plastic moulding gives this device a unique look a tad like the old snow globes that appear this time of the year or old fashioned glass paperweight.

Measuring 144x144x133mm and weighing in at 970 grams this device feels as if it has some audio substance underneath the facade.

Easy to set up all you need to get the new Amazon operational is the app, which self-senses the speaker once it’s paired to a wireless network.

The new speaker also has a Zigbee smart home device control capability that allows one to operate SmartHouse devices without having to plug another hub into your router.

Another new feature is the status light that is now a circle that is housed at the base of the speaker when first plugged in. When it turns orange, you can connect the device to the Amazon voice eco system.

Apart from streaming music playlists, to being able to place audio calls this device has been well thought out when it comes to functions such as wanting to know the weather, the sports scores or being able to voice order from the Amazon store online.

As for audio output the sound is very good, the speaker has a 3-inch woofer and two 0.8-inch front-firing tweeters.
What I likes is the sound is superior to the flat or slightly tinny sound you get sometimes with several other portable or network speaker that can only deliver 16 bit sound or some of the B&O speakers where you are paying for the name not the sound.

This is not a top-level sound system it’s an okay system for listening to radio or music feeds in the background while having the added benefit of managing voice commands for information.

If you want something better you need to look at an Audio Pro, Klipsch or Anthem speakers.

The improvement from the last model Echo is that this speaker supports multi-room audio, allowing you to set up a stereo pair while also being able port audio from one room to another.

I use Amazon Music, but you can equally play Spotify, Apple Music and Deezer content.

Connectivity can also be via Bluetooth.

This is excellent value for money for a product you will get value out of every day.

The sound is good, and Amazon have done a great job humanising this speaker with a design that is softer and more appealing for a home environment. 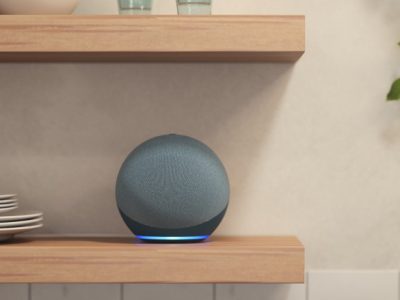 All The Biggest Tech Announcements From Amazon’s Hardware Event