Home > Accessories > REVIEW: Amazon Echo Show, Will It Be A Category Killer This Holiday Period?

REVIEW: Amazon Echo Show, Will It Be A Category Killer This Holiday Period?

Category killers can come out of the blue and can fade very quickly in the consumer electronics market. This year one of the big new categories are voice activated desktop video devices that are one step up from the voice activated speaker, they are tipped to be big sellers this holiday period.

The big players in the market so far are Amazon with their Echo Show, Google, JBL with their Link View and PC maker Lenovo with their Smart Display.

The first of these devices that I tested was the 10″ Amazon Echo Show which marries voice video and artificial intelligence together in one neat unit. This new model is larger (246 x 174 x 107 mm) than the old model which not launched in Australia it’s (187 mm x 187 mm x 90 mm) in size and is better quality than the previous model.

I would rather have the larger screen for this model given its uses. For anyone looking for something smaller, there’s the 7-inch Google Home Hub, which looks tiny side-by-side with the new Echo Show.

This device is not only a smart speaker it’s also designed to deliver information on command not unlike their Echo speakers, the big difference is that you also get a screen for video and information viewing.

While the speaker is excellent along with the output quality of the (1280 x 800 pixel) screen which makes it ideal for watching Amazon movie content or video’s it’s still a very limiting device especially when you are trying to find key pieces of information about products or services.

Even commands for a recipe is only half there especially as you have to go to a site such as Taste to get the actual recipe. With the Google Assistant devices, you actually get told how to cook a particular recipe.
Built-in recipe support lets the Echo Show become a key kitchen aid.

The problem is that Alexa doesn’t always find what you want. Asking for a bolognaise sauce recipe, Alexa tried to fob me off with a fish sauce recipe.

With this device I also had problems getting it to play the right radio station.

A command as simple as Okay Alexa, ‘Play ABC 702 Sydney” resulted in me getting either ABC News or another ABC program. After several attempts it finally got the right station, but it did excel at playing music from Spotify and Amazon Music.

One thing is clear voice and video is here to stay.

The build quality on this device is excellent and is up to the same quality as the Amazon Echo Pro speakers.

The Echo Show 2 has a basic rectangle design with sides that decline toward a narrow back in pyramid-like shape. Inside this device are two, 2-inch premium drivers and a passive bass radiator

One thing that is neat is when you first get your hands on this device you get an on screen prompt about something it can do.

One irritating feature is that if you have open rooms and Echo speakers in different rooms as I have the sensitivity of the Alexa Echo speakers results in all your speakers firing into life at the same time.

The Echo speakers that I originally purchased in the USA don’t know which one your you’re talking to.

Simple commands to covert money, or what is the weather are easily answered but I suspect that what Amazon are not able to do is get into the deep intelligence or information that Google is able to deliver which is why these two Companies need to stop fighting and offer each other value.

Where this device excelled was when you called up songs from Spotify or other music streaming services. The response time was quick and 99% of the time the right tracks were played.

There is also an Amazon news service and it is easy to set up feeds from the likes of ABC News Reuters, or Sky News. All you have to do is say “Alexa, what’s the news?”

You can also set a shopping list which also appears on your Alexa app.

To set this device up is easy. You need a smartphone and you need to download the Amazon Alexa App. If you follow the prompts you will be operational in minutes.

One issue I did have was mobile phone identification.

Despite three calls to Amazon support I was still unable to get back a code that worked on my smartphone. It kept telling me that I had another account and that my mobile phone was not recogniseds.

What you do have to do to get access to YouTube is say Alexa Open You Tube. This in turn opens a browser. With a Google device a native YouTube app is built in.

Conclusion
If information is what you want, I think Google has the edge. Amazon is a shopping web site that has branched out into hardware where they can deliver a higher margin. With the Echo Show the device is solid, well designed and above all has great audio output but not as good as the JBL Link View.

While the hardware is excellent the software still needs some work done on it before it becomes a worthwhile competitor to JBL and the Lenovo offering which has a Qualcomm chip built in and that is another story.
7/10 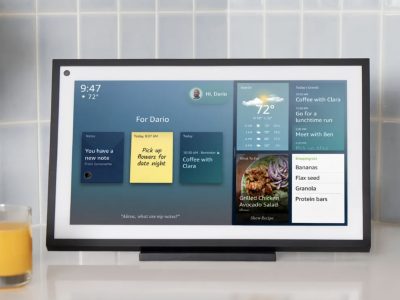 REVIEW: If Sound Is Your Go, The JBL Link View Delivers The Best Of Both Worlds