Panasonic has unveiled two new OLED TV ranges for 2018, the FZ950 and FZ800. Both models, to be available in 55- and 65- screen sizes, will support the new HDR10+ dynamic metadata open standard out of the box.

Last year’s EZ1000 TV remains in the line-up, but only in its 77-inch guise. Both new models will ship with Ultra HD Premium and THX certification.

The new flatpanels were presented at an exclusive pre-CES conference held at Deluxe in Hollywood. The Japanese giant has partnered with the post production movie house for image tuning. Over the past year, Deluxe has purchased sixty Panasonic 65-inch EZ1000 OLED TVs for worldwide use as a consumer reference display in its production suites.

Panasonic says it won’t restrict HDR10+ support to premium OLED TVs. European Marketing Manager Craig Cunningham told Channel News that it would also appear on LED LCD models at lower price points. More details will be released in the spring. It’s thought that the new HDR10+ standard will be most beneficial to low cost HDR TVs with limited peak brightness, as it will help them better tone map HDR content.

The incoming FZ950 and FZ800 models herald a number of image refinements (described as evolutionary rather than revolutionary by General Manager Paul Williams), but one is particularly unique.

Conventional LUTs are fixed to the colour space used by the source. Now the HCX processor can automatically monitor the average brightness level of a scene and uses picture analysis to dynamically load an appropriate LUT.

The technology may sound incompresible, but demonstrations proved dramatic. Images are brighter and colours more vibrant, when compared to a 2017 screen.

There is no difference in picture performance between the two new ranges: panel, processing and Absolute Black Filter are identical. The sets are differentiated by their sound system and cosmetic design.

The range-topping FZ950 ships with a new version of the Dynamic Blade soundbar, tuned by Technics. It features eight speaker units  – four woofers, four mid-range drivers and two tweeters, plus a quad passive radiator to boost bass. It also goes 40 per cent louder than its predecessor.

While both OLED TVs are compatible with dynamic metadata HDR10+, there is no support for the rival Dolby Vision standard. However, the company will offer Dolby Vision on its new premium 4K Blu-ray player, the DP-UB820.

The DP-UB820 will be joined by the DP-UB420 and lower-cost DP-UB330 and DP-UB320 series during 2018. The flagship model and second tier DP-UB420 will also be compatible with Blu-ray discs that use HDR10+ dynamic metadata technology.

When quizzed as to why it was supporting Dolby Vision on Blu-ray, but not on its displays,  spokesman Cunningham said that the brand’s market share with UHD Blu-ray obliged it to support enthusiasts who may not own a Panasonic display.

All models will offer voice control for both Amazon Alexa and Google Assistant, for basic transport control.

Asked why the new flagship didn’t build on the numerical nomenclature of previous flagship player UB900, the company hinted that it wasn’t done yet. It seems an even higher spec 4K UHD player is on the cards. 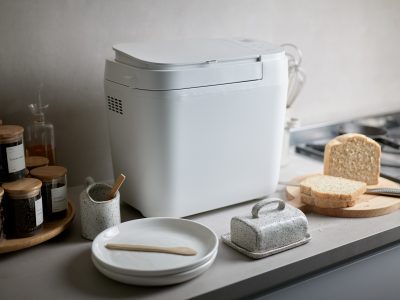