Nintendo is reportedly working on the next version of the Nintendo Switch – with the most likely scenario being a smaller, handheld-focused version of the game console being developed.

The Nintendo Switch Mini would see the original Switch downsized into a cheaper and more compact package that’s more portable.

German tech blog WinFuture recently published an allegedly official mock-up of the device, showing a device that looks similar to the Wii U. 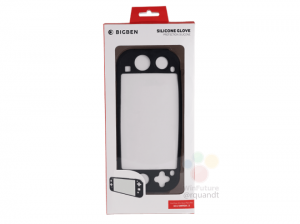 Switch Mini renders depict non-detachable Joy-Cons and an onboard display screen, which is flanked by two joysticks with accompanying buttons and a D-pad.

“I believe the console will come with the ability to transmit games to larger displays,” Ben Arnold, senior director of innovation and trends at the Consumer Technology Association, told Inverse.

“In short, the new Switch mini will essentially be a controller with a built-in touchscreen, which was a defining feature of the Wii U.”

A Eurogamer report suggests that the Switch Mini will come with an upgraded version of the Nvidia Tegra X1.

The report also says it will come with double the RAM to reduce load times, improved battery life, and boosted graphics performance.

Nintendo has yet to confirm the console, though it hasn’t ruled it out either.

A report from the Wall Street Journal predicts the new Switch Mini to be released in mid-to-late 2019, though Nintendo president Shuntaro Furukawa has since shut those rumours down.

“While we are aware there has been coverage to that effect, we cannot comment in regard to speculation and rumours about new hardware or software,” Furukawa said.

“It would spoil the surprise for consumers and is against the interests of our shareholders, so we are withholding any discussion.”

“We are constantly developing new hardware and new software. We’ll let you know as soon as anything is ready to be announced.”

Acer Releases A Monitor For Notebooks