Upscaling of 4K and HD content to 8K is set to deliver a major boost to owners of the new iQ4 box with real time 4K shot sports content able to be viewed in 8K.

The unlock key is new Samsung artificial intelligence found in the new Q900R QLED 8K range of TV’s that will be released in Australia shortly.

Unlike conventional sets that use filters for smoothing, and detail enhancement and restoration processing for greater perceived detail, Samsung’s 8K AI upscale technology (delivered by the company’s proprietary Quantum Processor 8K) is based on ‘machine learning’ and can cleverly learn (and store in its database) what processing tools to use depending on the content type.

An example is the upcoming cricket season, content shot by Foxtel in 4K which in itself is a significant improvement over Full HD used by free to air TV stations in Australia will now be able to be seen in 8K or 7680 x 4320 resolution which is four times that of 4K.

What Samsung has built into their new TV’s is an intelligent upscaling algorithm that can upscale 4K, Full HD and even SD content to “quality nearly the equivalent of 8K resolution”, improving detail and depth while reducing noise and motion issues – whether it’s from a streaming service, set-top box, HDMI, USB or even mobile mirroring.

At today’s IFA press conference Samsung executives told ChannelNews that the technology “compares low and high-quality versions of the same content to learn the technological differences between the two and form a vast database. It analyses millions of pieces of video content and finds a correlation. Based on its analysis, it can select the optimum filters that support brightness, the level of blackness, spread and other errors from all inputs, and transform low-definition content to close to 8K high definition.”

Resolution and upscaling aside, the new TVs have a 4000-nit peak brightness delivered by ‘Direct Full Array Elite’ backlighting. They have also been certified with 100 per cent colour volume capability.

The problem now is that the resolution of content being shot and recorded by Foxtel in 4K is so clear and so good that sports participants are going to have to be careful of what they say on field as audio also falls under the TVs’ AI upscaling technology.

A sound optimization feature built into the new TV’s aims to enhance audio performance depending on content type by identifying the content’s metadata and continually analysing and rendering the sound signal accordingly. For example, during a football match, crowd noise will be amplified after a goal along with swearing and cursing by players. 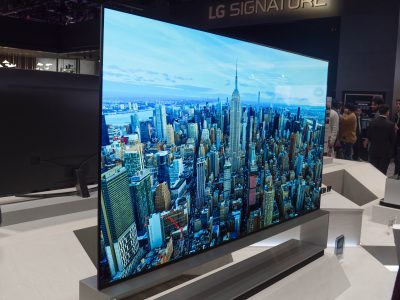