Today marks the 25th anniversary of the launch of Microsoft’s Windows 95 operating system, which famously introduced the Start button.

The release on August 24, 1995 (US time) was marked with a glitzy event hosted by CEO Bill Gates, and featuring talent such as late-night host Jay Leno.

The OS introduced Windows to the masses with its (at the time) simple and accessible user interface, and massive advertising campaign featuring the Rolling Stones hit Start Me Up. People queued at midnight to buy a copy of the OS as soon as it launched.

Aside from the Start button, Windows 95 also introduced the task bar, desktop shortcuts, and recycle bin, and added support for longer file names and plug-and-play functionality. Extended support for the system ended on December 31, 2001, shortly after the release of Windows XP.

Microsoft has released a promotional video to mark the occasion, showing the evolutions Windows has taken over the past quarter-century including the XP, 7, and 10 versions (though notably lacking the unpopular Windows Vista and 8). 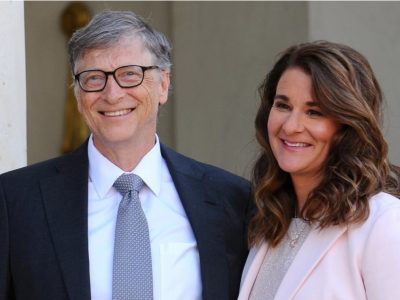 The Other Woman In Bill Gates Life Revealed After Divorce Announcement