Foxtel Shuffles Management Ahead Of IPO

As previously tipped by ChannelNews, Foxtel CEO, Patrick Delany, has announced a re-structure of the newly merged entity’s management team, with Fox Sports COO, Peter Campbell, promoted to CEO ahead of the company’s public listing. 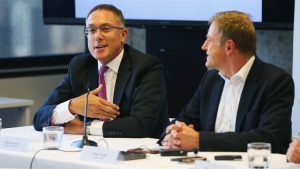 Ms Laing is known for her involvement in Nine’s 2015 NRL broadcast rights negotiations, and has been working as a consultant to Foxtel after leaving last year.

Mr Smith’s appointment comes after Foxtel abolished its a COO role in 2015, amid a “flattening” of operations.

Both Smith and Laing were reportedly involved in Foxtel’s merger process with Fox Sports.

As reported yesterday, former Amaysim CEO, Julian Ogrin, is set to join the pay-TV provider in late July, and is tasked with leading the group’s IP strategy.

Mr Ogrin joined Amaysim in 2013, and was involved in the private company’s transition to public listing.