Appliance retailer Winnings is under pressure with profits falling despite a rise in revenues their bankers have also cut back on access to working capital prior to COVID-19.

The Company who entered the custom install market last year has reported 2019 revenues of $551 Million Vs $478 Million in the prior financial year.

Despite the rise in revenues profits fell from $2,75M to $2M which observers claim are disappointing.

A dividend of $1.3M was paid to the shareholders John Winning junior who is running the business and John Winning senior.

Margaret Formosa resigned as a director in 2019.

The Company also revealed that following a review by their banks that their working capital had been reduced from $20M to $15M from October 2020 which was pre COVID-19.

In September 2020 Winning will have to undergo Covenant testing that could see a further cut in working capital.

It’s believed that this cut resulted in the Company forcing suppliers to carry stock until an order was taken from a customer at Appliances Online. This resulted in several small distributors coming under pressure from their Insurance Companies.

Recently ChannelNews revealed that Wesfarmers had expressed interest in buying the business however this failed to eventuate with John Winning telling ChannelNews that Winning was “not up for sale”.

According to sources the Companies Appliances online business is struggling to deliver profits due to high management overheads such Winnings staff being used to make deliveries Vs contracting the work out.

Appliances online is also having to compete up against an aggressive The Good Guys. The Company did claim that during the COVID-19 lockdowns they witnessed “significant growth” for their Appliances Online business.

In an audit of the Appliance Online web site Vs Kogan, The Good Guys, Harvey Norman and JB Hi Fi for the month of July 2020 the site came in last in the volume of traffic visiting these sites.

Also impacting the business was a move in custom install with several large jobs coming in at a loss. This resulted in the Company restructuring the type and value of the jobs the Company is taking on.

In 2019 the Company also expanded into Victoria with new showrooms in Richmond and Chadstone, both these locations have been impacted by COVID-19 lockdowns in Victoria.

In their financial filings Winnings management said that due to the outbreak of COVID-19 all Winnings 17 stores were closed from the 30th of March to the 10th of May. 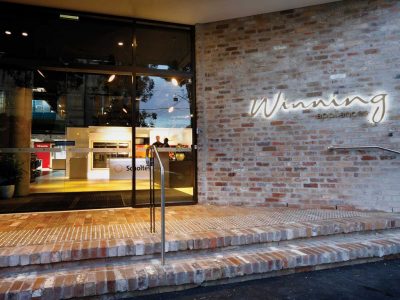