Nick Aboud the former CEO of Dick Smith who will next month face a NSW Court following the $400 collapse of the former consumer electronics retailer, is now running another retailer Cheap As Chips, where products that are struggling to make it at mass retailers are off loaded.

The only problem is that some of their products are far from cheap, currently the Companies web site has a 65” 4K Blaupunkt TV listed at $999 that includes Netflix despite this TV brand not being listed as an approved TV brand on the Netflix web site.

A similar TCL manufactured 65” Ffalcon TV being sold at JB Hi Fi is listed at $598 some $400 more expensive than the Cheap as Chips Blaupunkt TV.

Despite listing a Mobile phone category there are no mobile phones listed.

Several other electrical categories on the Cheap as Chips web site are devoid of stock listings.

According to Cheap as Chips’ website, the company has over 42 stores in South Australia, regional Victoria and New South Wales and employs over 800 people.

The $999 Blaupunkt TV which mentions 4K twice in the headline, is not available at any of the Cheap as Chips South Australian stores one store in Queensland and no stores in New South Wales.

Abboud joins the business from Kidstuff, where he served as CEO for less than six months.

On the 8th of March Aboud will face allegations in the NSW Supreme Court Equity Division that he and other directors at Dick Smith overstated the value of inventory and stock on the DSH’s balance sheet, overstating the reported rate and amount of gross profit and net profit and overstating reported shareholders’ equity.

Blaupunk TV, Cheap As Chips, Nick Aboud
You may also like 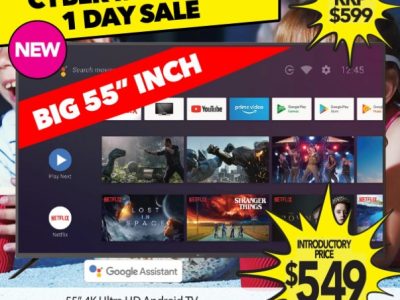 Nick Aboud’s Cheap As Chips Could Be For Sale