More Australians are connecting to the NBN and on faster plans as the network rollout nears completion, just in time for it to come under threat from burgeoning 5G networks.

Households connected to the NBN are most probably doing so through Telstra, who connect more than 2.7 million homes, directly or otherwise.

The telco has more than double the market share than its nearest competitor, with 48.6 per cent of the wholesale access seeker market.

Vocus has 8 per cent, and other retail service providers, who may access wholesale services through NBN Co itself or another provider, account for 7.1 per cent.

The latest figures show around 5.7 million Australian residences are now connected to the network, up almost 10 per cent from the last quarter.

More than half of those (3.63 million) on plans that promise more than 50Mbps connections, a jump of nearly 20 per cent since the previous quarterly report.

“While the total number of connections to the NBN has been increasing at a steady pace, there is strong growth in higher speed plans,” ACCC chairman Rod Sims said.

3.1 million connections were for 50Mbps services, pointing to a relatively low uptake of the more expensive and fastest 100Mbps plans among residential customers.

Actual speeds experienced by these users may differ as another recent report from the ACCC found 1-in-8 NBN customers were being overcharged for under-performing services.

Around 1.3 million homes are connected by fiber-to-the-premises, a number that has hardly changed in more than two years, increasing by less than 20 per cent.

In contrast, the number of fixed line residences forced to settle for fiber-to-the-node technology has nearly tripled, from a little over 900,000 in June 2017 to approaching 2.7 million in June of this year. 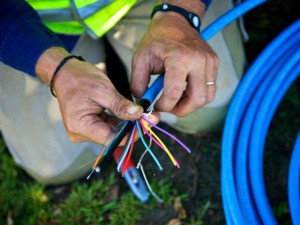 A little over 2 million homes remain connected to DSL services.

These services are set to be cut-off 18 months after NBN becomes available in the area.

Internet users who can connect to the NBN but who have still opted not to have become a recent focus for NBN Co as it looks to attract more customers.

Older Australians and low income households are among those NBN Co is trying to entice to take up a connection.

Mr Sims said the Commission remains concerned about entry-level options on the NBN and that the ACCC is in “active discussions with NBN Co about wholesale pricing”.

“Consumers must have a genuine choice, they should not be forced to take up higher-speed plans due to a lack of entry-level products that are affordable and that offer adequate data allowance,” Mr Sims said.

Networks have long complained about the high cost of wholesale NBN services impacting on their profits, and some, such as Optus, are now opting to build an alternative using 5G technology.

5G connections are set to offer greater speeds as well as flexibility, as they can be set-up by the customer using a supplied modem and without requiring further infrastructure, installation or technician visits.

The more flexible offerings are likely to appeal to the increasing proportion of Australians who rent their homes.