Samsung has shown off its new high-powered tablet set to go up against Apple’s iPad Pro and Microsoft’s Surface Pro as a tablet that can replace a laptop.

Aimed at creating content as well as consuming it, the Tab S6 (A$1099) is the first Samsung tablet to feature an on-screen fingerprint reader, as well as a dual-camera array (13MP+5MP, front-facing 8MP), with an ultra-wide angle camera that gives a viewing angle of up to 123 degrees.

The Tab S6 has also been kitted out with new, more powerful 7nm processors including a CPU the Korean tech giant claims is 81 per cent faster than on the Tab S4.

The GPU is claimed to be 64 per cent faster and has been optimised for better performance and smoother gameplay popular games such as Fortnite and PUBG and also includes Discord integration for in-game communication.

Samsung will include its S Pen in the box and sell the Tab S6 keyboard cover as an additional accessory (A$199), which also includes a trackpad and function keys to allow the Tab S6 to operate as a laptop using Samsung’s DeX mode first introduced on the Galaxy S8 smartphone.

Samsung’s Director of Product, Mobile Division Eric Chou said the Tab S6 is targeted at people who want to get work done on the go while also being able to be creative and consume content.

“We have always positioned the tablet as a merger between something where you’re able to get the best consuming experience and something you are able to use to create.”

“We’re not saying the Tab is a replacement for a PC, there is definitely going to be a space where they co-exist… but things like DeX mode allows people to have the convenience to have a desktop-like experience without going to a desktop,” Mr Chou said.

The keyboard cover also includes a free-angle kickstand and groove to keep the included S Pen secure in transit.

The S Pen attaches and charges magnetically on the back of the Tab S6, and Samsung claims it’s capable of gaining 10 hours of battery life off just 10 minutes charge.

Battery power isn’t required for writing and drawing input, but is needed for Air actions and gestures.

Samsung partnered with Japanese graphics tablet and stylus specialists Wacom to make the S Pen, now with 4096 pressure points, as precise as possible.

“Writing using the S Pen feels more like writing with a real pen… you get that precision,” Mr Chou said, but added there’s now a lot more to the S Pen than “mere writing”.

“We are always looking to get more utility out of the pen… when we first launched the S Pen, you could scribble, you could take notes, you could draw but that was the extent of it.

“What we have done over the past few years is extend the utility, now we are also opening up the gesture control… we are allowing for developers to develop on what that gesture control may look like moving forward.” 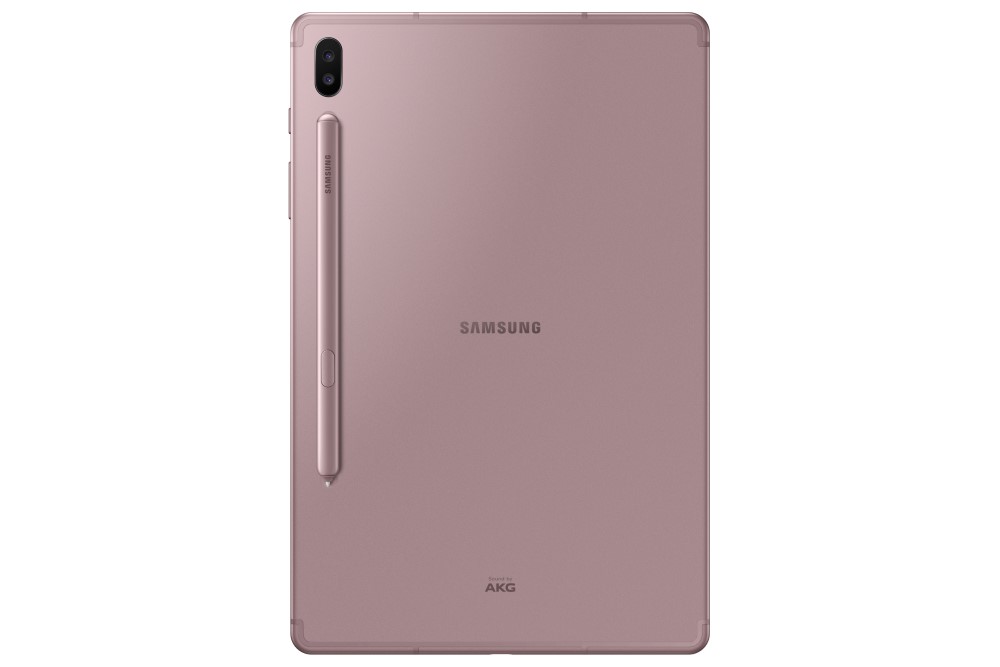 As well as teaming up with Wacom, Samsung has also continued its partnership with Adobe Premiere Rush that began with the Galaxy S10, giving users a more convenient way to edit and communicate through video.

“One of the things we’ve found is customers would have to export their video on to a PC or a laptop, do their editing before they share it out and then download it back on to their phone,” Mr Chou said.

“Adobe Premiere Rush on the Tab S6 allows you to natively edit using the S Pen, so you’re able to merge multiple videos together.”

Mr Chou said the partnership with Adobe also gives Samsung’s devices smoother performance because the application has been optimised for the hardware.

The Tab S6 will go on sale from September 13, with pre-orders available from August 27.

Customers who pre-order can upgrade to the 8GB/256GB device for free.