Home > Communication > 5G > Samsung Galaxy A90 5G Coming Down Under

Samsung Galaxy A90 5G Coming Down Under

Samsung Australia has confirmed the new Galaxy A90 5G will be coming down under, however an on-sale date and pricing are still yet to be confirmed.

This morning the Korean tech giant officially announced the new device, which will be the first in the A-Series to include the quasi-desktop DeX mode. 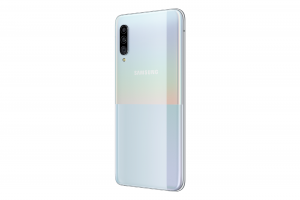 Like the rest of the A-Series, the phone will be primarily targeted at younger customers who either don’t want to buy a flagship Galaxy S or can’t afford it.

5G connectivity is being touted as a big draw for these customers, who want to share and stream content as quickly as possible in what Samsung are calling “the Era of Live”.

As tipped, the phone will be powered by a Qualcomm Snapdragon 855 5G SoC.

The A90 5G shares some things with the current A-Series flagship the A70, including its Infinity-U display, 25 watt super fast charging, and 4,500 mAh battery.

Improvements have been made to the camera set up, with the rear triple camera resolution increased to 48MP from 32MP.

DeX mode as well as Microsoft’s Your Phone app allows users to mirror their phone on their Windows desktop or connect to an external display and use like a laptop, bringing a touch of Note 10 to the mid-tier range.

The phone will release in Korea tomorrow.

Samsung’s local division said it’s working with operators and retail partners on the Australian launch, and said an on-sale date and pricing will be confirmed in the coming weeks.

5g, a90, cheaper phones, galaxy, mid-tier, samsung, smartphones
You may also like

Is Samsung Phasing Out The Galaxy S20 Series?
Latest News Samsung
//
April Glover
/
0 Comment
After the launch of the new Samsung Galaxy S21 models, it seems the South Korean company is already looking to... Read More