Okay, you want a big screen TV, how about a pair of glasses that you can plug into your smartphone and take anywhere, to bed, on an aircraft or while chilling somewhere during COVID lockdowns.

TCL who are well known for their TV’s has just rolled out a $899 pair of NXTWear G glasses that they claim delivers a 140” display simply by putting the glasses on.

I have just spent the weekend watching movies and live sport using these new TCL glasses and while they are a new concept, in big screen viewing and they do sound appealing and they do deliver a reasonable movie experience, these initially first pair are very much a work in progress.

The concept is brilliant, and credit has to be given to TCL engineers, for getting the concept of a personal big screen cinema, via a pair of glasses to market first.

I first saw a concept pair of these glasses sitting in the boardroom at TCL in Shenzhen China two years ago and from what they showed me back then to what they have delivered to market is a major transition.

What you get is a pair of glasses that power themselves from the device you plug in whether it be a Samsung smartphone, an Acer notebook or an iPhone.

Most Android premium smartphones including most of Samsung’s, going back to the Galaxy S8, plus many phones made by Asus, Razer, HTC, Sony, Razer, LG, Oppo, OnePlus and even the Blackberry Key 2 are compatible with the NXTWear glasses.

They are also compatible with 30 Windows laptops, the Apple MacBook Air and Pro models, the iPad Pro (with USB-C/Thunderbolt ports) and Google Chromebooks (the Pixelbook, Pixel Slate and Pixelbook Go, plus models by HP, Acer and others).
The new glasses deliver 1,920×1,080-pixel resolution at 60Hz.

They come with three swappable nose tips which can be found inside the lid of the case they come in.

I chose the larger nose tip and after an hour and a half watching a movie, I still felt comfortable wearing the glasses. The only problem was the pressure on the side and more to the back of the head because the arms unlike my optical glasses were not flexible and I suspect were designed by people with smaller heads.
After a while this became uncomfortable but was not enough to put me off watching a movie to the end.

I also suspect that flexible or adjustable arms are a struggle because of the amount of engineering needed in the arms to carry the audio to the speakers that are located in both the left and right arms of the glasses.

The frames are also fairly thick and weigh 130 grams, they fold up like regular sunglasses.

What TCL engineers have achieved is a major breakthrough with the NXTWear glasses housing two tiny displays that are right next to your eyes.

Because they are so close to your eyes, you believe, when viewing that you are actually watching a large movie screen.
The quality is also up and down literally.

I noticed when lying in bed the quality of the streamed image changed with tinges of over saturation and what looked like freckling of the overall content.

This was intermittent and was only present when I moved around.

Operationally these glasses are easy to use, If you’re using a compatible TCL phone such as the new TCL 20Pro 5G which came with the glasses, you’ll get a pop-up asking if you want to use mirror mode, or PC mode.

The phone then acts as a touchpad for you to navigate around with your fingers. I watched the bulk of my content connected to the Samsung S21 Ultra, the device recognised the external display though the device did believe I was attaching an external connection for DEX.

The display is via a 16:9, 60Hz micro-OLED 1080p display that TCL claims is the equivalent to a 140-inch screen, The glasses never faulted once whether one is watching Netflix YouTube or a Live TV streaming channel.
The sound was excellent, however when I compared the display on the NXTWear glasses Vs my Samsung S21 the quality on the smartphone was superior.

When I plugged the glasses into an ASUS ZenBook it would only recognise the Windows display image. 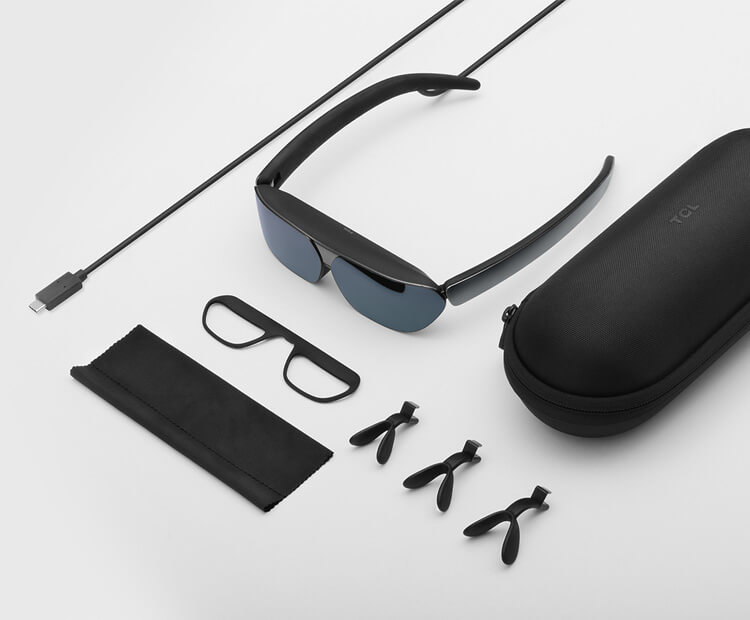 While my notebook saw the NXTWear glasses as a 4th display it would not allow me to activate Amazon Prime or Netflix via the glasses.

TCL claim that you can also work with these glasses on which on an aircraft or train is highly feasible though at this stage I would prefer to wait for the mod II model which I suspect will come before the end of the year due primarily to feed back from users.

Conclusion
Pro: If you are an early adopter and $899 is not a problem grab a pair of these because they do go down well with friends as a talking point.

They are cutting edge technology and for display quality it’s early days and while there are no problems watching content the quality has to be better due to the price point.

Con:
The concept is neat, but a lot more work has to go into the development of these personal movie viewing glasses as the concept has legs and is a really neat idea.

They badly needs flexible arms and ideally, I would like them to be Wi Fi compatible so that I can eliminate the cable. Ultra-High Definition would also be a plus.

However top marks need to go to TCL for what they have delivered so far today.

REVIEW: New TCL20Pro5G Smartphone All It Needs Is Brand Clout