The premium smartphone market is totally aspirational, some brands aspire to be Apple while other try to take on Samsung in the Android market, the only problem is that Samsung keeps lifting the bar and their new premium 5G Galaxy Note20 and Galaxy Note20 Ultra is as close to a near perfect device that one can buy.

The stark reality is that when one manufactures components such as processors, memory and display screens, you can guarantee that the best components are going to end up in your own devices first and this is what has happened with Samsung’s new hero smartphone which is a small PC, gaming machine and due to a relationship with Microsoft a productivity powerhouse.

What’s amazing with the new S20 Note is how much is packed into a device that fits in one’s hand.

Cutting edge components been a big problem for Apple because they have had to rely on Samsung for a great deal of the components found in an iPhone no more so than in their OLED display offering which in the new Samsung Note 20 Ultra is a top end AMOLED display.

The Galaxy Note20 and Galaxy Note20 Ultra come in new mystic colours which are more soft neutral tones that Samsung claim transcend changing trends with a brand new, textured haze effect that cuts down on fingerprints and smudges.

The display automatically adjusts to the content you are viewing to optimize battery life. You also get more than 50% charge in just 30 minutes.

Samsung has also delivered a new Tab S7+ tablet that is the best tablet I have ever played with.

Available in two sizes 11” and 12.4” the larger size tablet makes a massive difference especially when you want to watch Foxtel Sport or simply read a book.

The larger size is much easier on the eyes and cutting and pasting or writing notes on plans is a snip, I will explain this when I write my review.

All up Samsung has delivered six new devices 2X tablets 2X S20 Note smartphones and a very stylish pair of buds and a new slimmed down Watch 3.

With each and every one of these products one has to give credit to the Korean Companies designers, because they have pushed the design boundaries while also packing in cutting edge micro technology.

From their new bronze Galaxy Note 20 to a pair of matching bronze buds that deliver crystal clear sound while taking out unnecessary ambient noise to slick integration of the Watch3 that will deliver blood pressure and EPG information.

There is also a brand-new S Pen that with a simple flick takes your screen in a new direction.

Big improvement with the Note S Pen S Pen offers the ultimate writing experience so you can capture your ideas quickly with the wave of the pen.

The S Pen is what sets the Note apart from other Samsung devices and in their latest Galaxy Note 20 they have introduced five new anywhere actions including what’s been labelled touchless navigation.

With the flick of the S Pen you can capture, edit and share, your ideas across your phone, tablet or Windows 10 PC, this is possible because Samsung has worked alongside Microsoft engineers to seamlessly integrate Office 365 capabilities. These are capabilities found in no other device in the market and is a big reason for one to invest in this new smartphone. 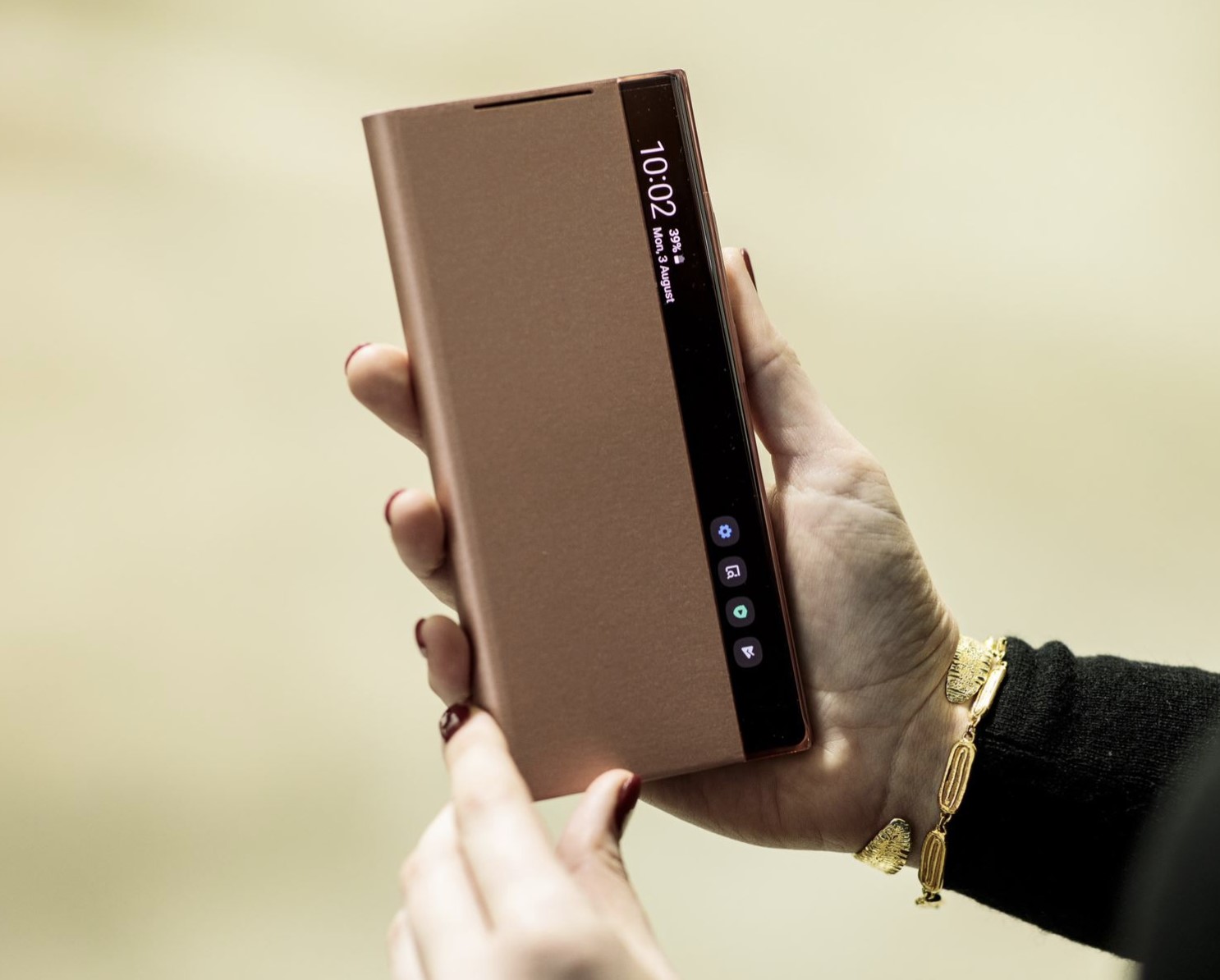 A new Samsung Notes feature easily straightens your messy handwriting into legible penmanship and when the app records audio and you jot down notes you can then simply tap a word in your notes to go to that moment in the recording.

Later this year, you will have the ability to run multiple apps side by side on your Windows 10 PC. And all your productivity ecosystems will be aligned across the synced devices you use.

It also syncs with Microsoft Teams which is proving popular due to COVID-19 lockdowns and people working from home.

They have also delivered powerful gaming options by delivering access and functionality to some of the world’s most popular Xbox games.

Beginning September 15, owners will be able to play over 100 Xbox games on your phone or tablet, directly from the cloud (beta) with Xbox Game Pass.

They include games such as Minecraft Dungeons and Gears 55.
Also built in is an AI game booster and Bluetooth audio response optimisation, and 240Hz touch latency on the Galaxy Note20 Ultra.

The difference between the Note 10 and the Note 20 is that users can now link their Galaxy device to a Windows PC through ‘Link to Windows’ on phone and a phone app on a PC.

Link to Windows is preloaded on select Galaxy devices.

Another big plus is the introduction of new video shooting capability that allows one to shoot an 8K video with 21:9 aspect ratio and 24fps.

This ultra-high-resolution shooting capability is a first for a top end smartphone.

The Galaxy Note20 can also be credited with having the fastest processor of all Galaxy devices if not all smartphones period.

The nice thing about this launch was that Samsung did not have to bang on about their camera which has been improved and we will review shortly.

The device will be available from JB Hi Fi or Samsung direct the pricing is below.

There is also a bonus offer with customers who sign up/recontract to a Galaxy Note20 Ultra 5G device payment plan (over 12, 24 or 36 months) with any advertised or in market Optus Plan during the device pre-order period will be eligible to redeem Galaxy Buds Live depending on their device purchase. (RRP $319).