Last night Google sent invitations for an event in San Francisco on Oct. 4 where the web company is expected to introduce new smartphones Chromecast upgrades and home-automation hardware, along with other new product upgrades.

The text of the letter, which includes the phrase “Ok Google, add to calendar,” suggests a bigger role for Google’s voice assistant. The invitation also features an animated graphic showing a search bar that morphs into the shape of a smartphone.

A recent tweet shows a Google logo, but reports have suggested that the new phones will be branded Pixel, rather than Nexus, Google’s previous mobile device brand. The 2016 Pixel smartphones are believed to be produced for Google on behalf of HTC, which has made Nexus phones in past years.

The product unveiling by Google, follows a eventful period for the global smartphone market. Apple new iPhone 7 and iPhone 7 Plus, which no longer feature a headphone jack, went on sale last week. Samsung Electronics, the biggest maker of phones that run on Google’s Android software, has been embroiled in a recall involving its Note 7, which are prone to overheat and burst into flames. While the timing of Google’s new hardware isn’t a departure from the past, there’s a risk it could be overshadowed. 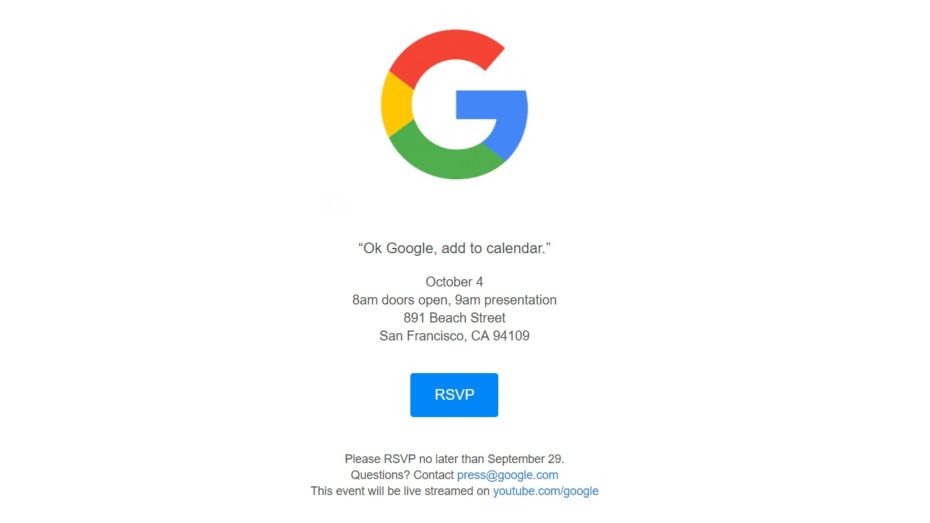 Google may also introduce a higher-resolution upgrade to its Chromecast media streaming device and new virtual-reality hardware, according to Android Police, a website focused on the mobile operating system. There are also reports that Google may ditch the Nexus brand for its phones; the company sent a tweet with the hashtag “madebygoogle.” Chromecast