Australian consumer electronics retailers are set to get a big boost on March 8th when the all new Galaxy 9 and S9+ goes on sale.

One carrier has told ChannelNews that they anticipate that the new Samsung device will appeal to consumer dissatisfied with what’s on offer from Apple and that they anticipate taking advantage of the poor image now associated with the latest Apple iPhone X which is seen as being inferior to the current model Samsung S8.

ChannelNews understands that consumers will be able to preorder the device as early as February 25th and buy the device outright on March 8th it comes with Android 8.0 Oreo with Samsung’s new UI sitting on the top of the Google OS.

Currently CE retailers and carriers are witnessing a “quiet” period and the launch of the new Samsung offering coupled with the roll out of a major marketing campaign will boost traffic into stores.

On the outside he Galaxy S9 and Galaxy S9+ will resemble their predecessors, however the rear panel has a different design for both phones. The phones will be IP68 certified for water and dust protection, and they’ll ship in four colours, including Midnight Black, Titanium Grey, Lilac Purple, and Coral Blue, at this stage it’s not known which colours will initially be sold in Australia.

Samsung is going with the same battery sizes it used for the Galaxy S8 series last year. Both phones will support wireless charging as well.

The Galaxy S9+ is getting a dual-lens camera, whereas the Galaxy S9 will have with a single-lens shooter, both cameras have a vertical orientation, and they sit just above the fingerprint sensor.

Retailers have been told that the new camera will be the main selling phone of the handsets.

On both model’s consumers will get variable apertures (F/1.5 and F/2.4) which will benefit owners shooting in low-light environments.

The second camera on the Galaxy S9+ has a F/2.4 aperture according to sources.

The selfie camera is built around an 8-megapixel camera, F/1.7 aperture, and autofocus.

A super slow-motion mode is also in the cards, and both phones will be able to offer 960fps video shooting options.

The Galaxy S9 and S9+ will also come with the same Infinity Displays as their predecessors.

The sizes and resolutions are unchanged: 5.8-inch and 6.2-inch Super AMOLED panels with 2960 x 1440 resolution. The position of the screen has been slightly altered, the report says so that the bottom bezel is slightly smaller.
The Australian phones will be powered by the Snapdragon 845 chips, and ship with 4GB and 6GB of RAM. However, only the Galaxy S9+ is getting more RAM.

The phones will ship with 64GB UFS 2.1 of base storage, upgradeable via microSD card.

Other features include dual-SIM support, USB-C support, AKG-tuned stereo speakers, and Bluetooth 5.0. Theirs is also a 3.5mm headphone jack built into the device.
Iris and face recognition sensors will be found on the front of the phone.

Samsung Could Put Your Face On Luna Park 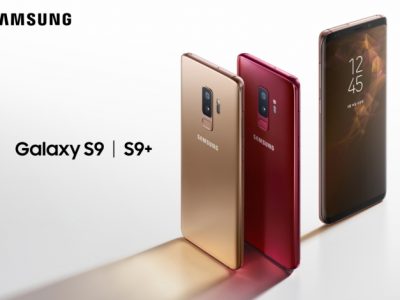 Samsung Brings Out Gold And Red Editions For S9 and S9+