Lenovo has shown off a prototype of its foldable PC at the company’s Transform 3.0 event in Sydney today.

The foldable device was first unveiled at Lenovo’s Accelerate 2019 conference in Orlando earlier this year and is expected to ship mid-next year, but it’s not known if Australia will be among the initial launch markets.

Lenovo vice president of global marketing, user and customer experience Dilip Bhatia said the device was borne from a 4-year roadmap that began with a dual-screen device before evolving into a foldable.

Mr Bhatia hopes customers will be swayed to replace a collection of other devices with Lenovo’s more versatile folding one, offering “smartphone portability with laptop performance”.

He said it’s unlikely to replace the smartphone, but has big ambitions to topple laptops, with folding and dual screen devices being “the next evolution” in portable computing.

Mr Bhatia envisions a future where users go from reading the news as a tablet, to multi-tasking office apps on the train, plugging into a dock to become a desktop PC at work, and reading a book at night all on one device that folds into the best configuration for each specific task.

“It’s really designed for the mobile professional on the go, it’s everything you want,” Mr Bhatia said.

“You see on the plane people travelling with a Kindle, a tablet, a PC, a book… this can really simplify people’s lives by offering one device that can really do it all.”

It’s hoped the foldable device, which will sit in Lenovo’s premium ThinkPad X1 line, can also find space in what Mr Bhatia calls millennial customers’ “digital wardrobes”, the collection of smart and connected devices they already have.

The foldable will likely have a variety of external, function expanding accessories such as pens, keyboards and docks, but it’s yet to be decided what will actually be included in the box and what will cost customers extra.

The foldable PC is expected to have pen functionality it’s hoped may be enough to make people abandon pen and paper, but Bhatia admits the industry still “has a ways to go” before consumers will fully embrace digital note-taking.

While the prototype was a non-functioning model designed to give an idea of the devices form-factor, Mr Bhatia said consumers can expect a seamless computing experience.

Lenovo is partnering with Windows developer Microsoft to optimise the operating system and the company’s apps to run well on folding devices.

The foldable device is expected to comprise a 13.3-inch LG-made display featuring 2K resolution, 4:3 ratio with at least 300nits brightness, powered by a quad-core Intel processor.

The device is also expected to have at least two USB-C ports and WWAN connectivity.

Much hyped foldable devices suffered an embrassing setback when Samsung raced to the market with the Galaxy Fold smartphone earlier this year, only to be forced into postponing its release date after early review models began suffering a variety of issues with its folding display.

Lenovo are looking to capitalise on the durable reputation it’s built with its hard-working Thinkpad laptops, popular with corporate and SMB clients.

Mr Bhatia said the foldable device will be subject to more rigorous testing, with the foldable hinge to be tested more than double the amount as on its laptops.

Lenovo reported its earnings this morning, showing an eighth consecutive quarter of growth and revealing it now owns almost a quarter of the market.

Mr Bhatia said that market share has been driven by the company’s “focus on customers in everything we do”. 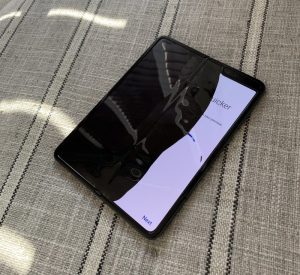 He also pointed to large scale supply contracts such as the recent delivery of a million products to the education sector in India as another contributor.

Students can use virtual reality headsets to go on simulated field trips to places like the International Space Station using Google’s Expeditions app.

Older learners at TAFE and universities can also use them to get a feel for real-world workplace environments they aren’t yet qualified to enter.

The headsets are currently in 40 schools (private and independent but currently no state), six universities and four TAFE campuses around Australia.