Backed by Samsung, South Korean team SKT Telecom T1 has won the 2016 world championships of the League of Legends.

The event that has been watched by millions of Australians is an extremly popular game that involves two teams of five players fighting over a small map.

Each player controls a hero outfitted with a variety of attacks or defence abilities, and the winner is the first to destroy their opponent’s base.

According to statistics from Riot Games, which created LoL, about 100 million people play the game every month.

The win is the third time in four years that SKT has taken the title. It also won the title in 2015.

The final ran for six hours and was held in front of almost 20,000 LoL fans at the Staples Center in Los Angeles.

Tense final
SKT’s Lee Sang-hyeok, aka Faker, was named as the most valuable player of the tournament.

The total prize pot for the tournament was $5m with $750,000 going to second place team Samsung. The money available to teams taking part was increased by fan contributions.

Writing on the Rock, Paper Shotgun gaming news site, Philippa Warr said the final had been “breathtaking”, as the Samsung team had fought back from losing the first two games.

However, she said, everything had changed in the “beautiful” third game, which lasted 70 minutes and saw Samsung wrest a keenly contested win from SKT.

Samsung then took the fourth game more easily to set up the decider.

In the event, Warr said, SKT’s “fluidity” and experience had won through, giving them the title, cash and Summoner’s Cup trophy. 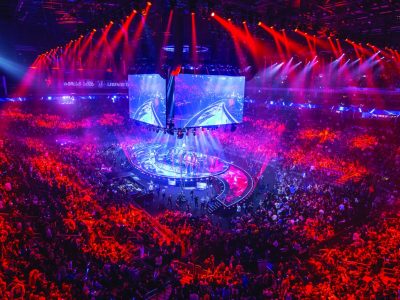