Acer who is Australia’s #1 PC gaming company has stunned attendees at IFA 2018 with the launch of a new format Predator Triton 900 notebook and a gaming cockpit built around a moving chair.

. What is unique about the new notebook is a convertable screen that has a unique hinge that allows the screen to be flipped around, also unique is a new fan system designed by watching how owls hunt. 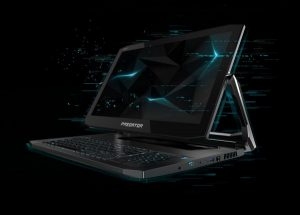 The 4K UHD touchscreen takes advantage of the Nvidia’s G-Sync, all supported by the CNC-machined hinge.

According to Acer CEO Jason Chen who introduced the new notebook users can use the new Acer offer as a regular notebook and then convert it with the flip of the screen into a mean “powerful” gaming machine.

Users can bring the screen close in addition to being able to flip it around or convert it down into a tablet. The device has a mechanical keyboard.

In addition, Predator Triton 900 also features the latest 4th-generation of Acer’s Aeroblade 3D fans, a full mechanical keyboard, and a switchable trackpad with a hidden, light-up number pad underneath.

The Orion 9000 desktop PCs will be among the first to ship with Nvidia’s all new GeForce RTX GPUs as well as an Intel Core i9 CPU boasting up to 18 cores.

The standout feature of these desktops are the clear side panels which also prevents electromagnetic interference (EMI) according to Acer.

Among the Orion series Acer also showed off the new Predator X desktop.

Designed for enthusiasts and creators, the Predator X boasts dual Intel Xeon CPUs and 12 ECC compatible DIMM slots. It’s basically a workstation but with a heavy focus on gaming.

The product that intrigued me was called the Thronos which is basically a chair that built around a cockpit that rotates.

Users can attach three 27 inch monitors and when you sit down the whole cockpit lights up with the motorised motors kick in.

Costing has not been announced but we do get to trial the device tomorrow on the Acer stand at IFA.