A massive row has broken out over the quality of Whirlpool appliances after 519,000 washing machines were recently recalled, in the past consumers have faced problems with faulty Whirlpool dryers.

In the UK MPs have called on the US owned Whirlpool to offer refunds or “swift compensation” as consumers find themselves without a washing machine.

Earlier this year the Good Guys Dropped Whirlpool products when the Harvey Norman owned distributor Arisit took over as the distributor.

Whirlpool washing machines are currently being sold at Harvey Norman and the Winnings owned Appliances Online.

Seventy-nine fires are thought to have been caused in the UK by an overheating door locking system, a fault which develops over time, according to Whirlpool, which owns the brands.

Up to 519,000 Whirlpool washing machines sold in the UK need to be recalled, a process that will start in early January among the brands being recalled are branded Hotpoint and Indesit.

Seventy-nine fires are thought to have been caused by an overheating door locking system, a fault which develops over time, according to Whirlpool, which owns the brands.

Politicians claim that Whirlpool have failed to replace the faulty machines.

Whirlpool claims its priority was to ensure potentially dangerous appliances were removed from homes.

About 20% of the Hotpoint and Indesit washing machines sold since 2014 are affected.

The Indesit brand is also being sold in Australia.

Yvonne Fovargue MP, who chaired the Consumer Protection All Party Parliamentary Group (APPG) claim that Whirlpool appeared to have learned little from its handling of a safety problem regarding tumble dryers.

“Whirlpool’s advice to affected customers simply not to use the machines until repaired or replaced is wholly inadequate, particularly in the busy holiday period when families are at home,” said Ms Fovargue.

“It appears that once again customer trust is being abused and eroded. Whirlpool should swiftly compensate customers who have been severely let down.”

At this stage Whirlpool is refusing to offer refunds.

According to the BBC Rachel Reeves, who chaired the Business Committee in the last Parliament, which investigated the Whirlpool saga, called for those affected by the washing machine recall to be offered a refund, rather than just a repair or replacement. 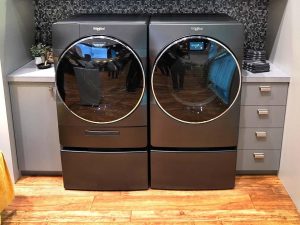 “I understand Whirlpool is refusing to offer refunds to consumers hit by this latest safety problem in what seems to be a never-ending saga,” she said.

“That refusal will further damage consumer confidence and shows a lack of respect for the people on whom Whirlpool’s profits depend.”

The company said it was in contact with various second-hand sales platforms to alert them to recall and ensure the affected products were not sold, as it had for the tumble dryer recall.