Alienware Gears Up With VR-Ready Laptops

Gaming PC specialists Alienware have announced a new line of gaming notebooks just in time for the company’s 20th anniversary.

The laptops all boast Nvidia’s GeForce 10-series GPUs and Alienware’s own TactX keyboard, which introduces an optimised RGB LED for better key lighting.

“Gaming is in a time of renaissance right now; awesome games and development, amazing resolutions and technology, plus the pure excitement around VR experiences – it’s an incredible driving force and it feels similar to the energy that started Alienware 20 years ago,” said Frank Azor, general manager of Alienware and XPS, Dell.

“These new notebooks are a product of that history and approach, but also of the demands and expectations of gamers today. Being true to both is what Alienware is about and we’re proud to bring these notebooks to gamers.”

The flagship model of the range is the new Alienware 17, which touts an overlocked Intel Core i7 K-series processor and DDR4 memory to go with its high end Nvidia graphics card and crisp FHD display.

Beyond specs, the Alienware 17 also boasts support for Tobii eye-tracking technology adds great accessibility features based on where you’re looking.

Alienware says this will allows gamers to fine tune their skills and using the new Overwolf app track where they were looking during gameplay and replay that footage to learn from their mistakes.

It’s the company’s mid-size offering and while it comes in a slightly thinner frame, it’s still packing the same graphical punch courtesy of Nvidia’s GeForce GTX 1060.

The Alienware 15 features a 15.6-inch anti-glare display that supports up to 4K resolutions.

The company have been quick to play up the battery life on offer here, saying it’s “built so gamers can be on the go, its exceptional battery life keeps it going with a 68 watt-hour lithium ion battery and an optional 99 watt-hour battery to enable extended gameplay when away from a plug.”

Last but not least, the new Alienware 13 is the smallest notebook in the range but the graphical power it shares with its siblings makes it one of the most compact and competitive VR-ready devices available.

The 15 and 17 will become available from September.

Australian availability for the Alienware 13 has not yet been announced. 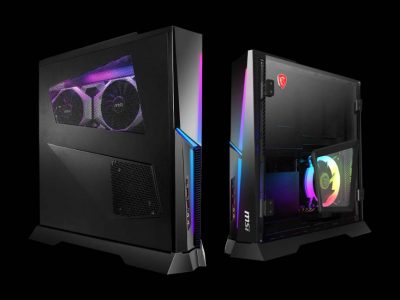