Desperate to return to profitability, Sony has announced that, despite being unprofitable, they have a plan and it involves spinning out their video-and-sound business into a separate company and shrinking their headquarters personnel as part of a three-year turnaround plan to speed up decision-making and become profitable again.

Speaking in Tokyo this morning, Sony CEO Kazuo Hirai said that he aims to do what his predecessors have consistently failed to do in the past and that is to make sure that “profitability sticks”.

Investors have so far backed Mr Hirai’s turnaround strategy with Sony’s shares rising 36 per cent over the past 12 months.

However, Analysts say Mr Hirai faces a challenge as he tries to position the Japanese entertainment and electronics group to capture new markets for autonomous cars, robotics and internet of things, while ensuring volatility in its film and electronics businesses do not jeopardise its recovery.

In the final year of its three-year business plan through March 2018, the company expects its operating profit to hit $4.5bn, which would mark its best income since the 1997-98 fiscal year.

“The operating profit target of ¥500bn for fiscal 2017 will mark our highest level in 20 years, but not once have we been able to sustain this profit level over several years in Sony’s 71-year history,” Mr Hirai said.

He stressed the profitability in sprawling Sony, including its lucrative PlayStation video-game business, which just came out with a popular virtual-reality headset.

Hirai also told reporters another important area is Sony’s TV sector, which has been in the black for the last few years, after losing money for a decade.

He also said profits will be improved in smartphones and movies however he failed to reveal how Sony will turn around their smartphone business which is a “basket case” in Australia with consumer switching off the Sony smartphone brand. 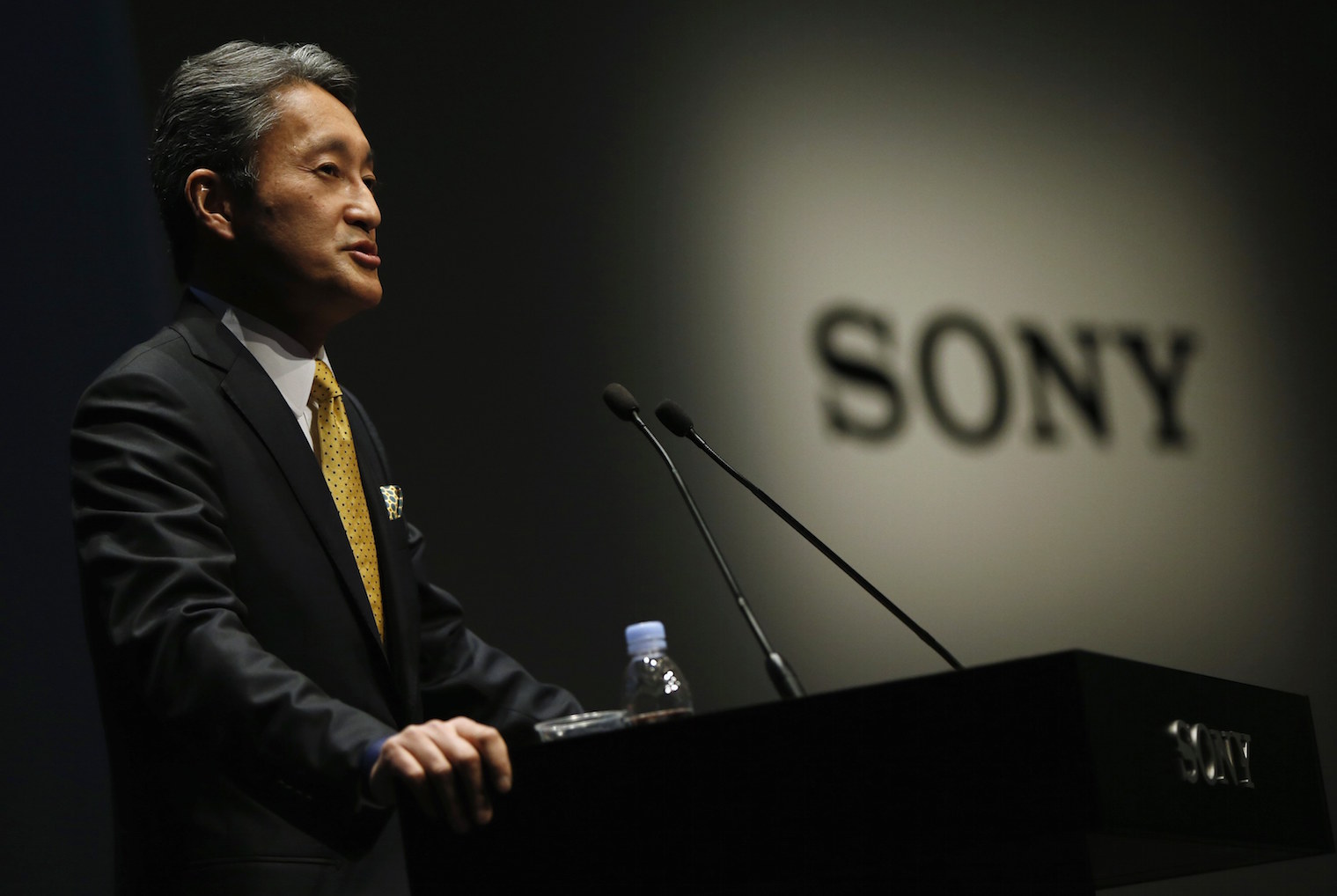 Sony Corp’s President and Chief Executive Officer Kazuo Hirai speaks during its corporate strategy meeting at the company’s headquarters in Tokyo February 18, 2015. Bolstered by investors’ faith in its restructuring, Sony Corp is set to announce a new strategy highlighting the potential of its image sensors, PlayStation and entertainment businesses to help it return to growth after years of losses. REUTERS/Issei Kato (JAPAN – Tags: BUSINESS SCIENCE TECHNOLOGY ENTERTAINMENT)

He did claim that Sony aims to increase sales volume by 13 per cent this year which analysts claim could be achievable because Sony smartphone sales have slumped “to an extremely low base”.
“For Sony to be able to continue generating high profits, each of our group’s divisions needs to strengthen their efforts to build new businesses rather than maintaining the status quo,” he told a packed audience.
The Financial Times said that despite stemming losses from its television, smartphone and other electronics businesses, Sony has yet to restore its ailing movie studio after a dismal run at the box office which has left it trailing its Hollywood rivals.
Sony warns it will take $1bn write down on its movie business with poor box office returns and faster than expected declines in DVD sales to blame.

Earlier this month, Mr Hirai named Tony Vinciquerra, a former 21st Century Fox executive, as the chairman and chief executive of Sony Pictures Entertainment, which includes Sony’s movie studio, television production business and global television networks unit.
The film business will aim to achieve an operating profit margin of 3.8 per cent in the current financial year, well below the 7-8 per cent margin Sony had originally targeted when it released its three-year plan in 2015.
To rebuild its film business, Mr Hirai said the company will aim to make better use of its intellectual property portfolio such as Spider-Man, which will be released this summer as a co-production with Walt Disney’s Marvel Studios, while continuing cuts in production and marketing costs.
Following a decade-long restructuring phase, Mr Hirai also said it was time to start capturing a bigger market share in certain regions for its TV and other electronics businesses.

“We see the first signs of risks re-emerging,” Jefferies analyst Atul Goyal wrote in a client note. “Why must Sony target higher volumes? If it needs higher volumes to stay profitable, then that is not a good sign”.

Atsushi Osanai, a former Sony employee who is now professor at Waseda Business School, said Sony’s turnaround up till now had been a textbook case of offloading unprofitable businesses and focusing on higher-end products rather than pursuing scale — standard management strategy for restoring margins.

Mr Hirai has said Sony will aim to find new growth by expanding the sale of its image sensors in smartphone cameras to cars and strengthening its medical business.

“It is not only stable management that is required from Sony’s president but people have hopes that Sony would do something fun every now and then,” Mr Osanai said. “Mr Hirai may be venturing into an area that will require something different from his previous management style.”

Playstation. Bravia TV's Movies, profits, sony
You may also like