What’s the difference between an Android TV that runs on an app designed for smartphones Vs a genuine full Monty Android TV that’s actually been approved by Google?

The answer can be found in the all new Bauhn 65″ 4K TV, that is set to go on sale at Aldi on the 30th of October, complete with Google certified voice capability and an Android TV OS, that actually scales the picture properly delivers a smooth ribbon management system for the content including Netflix and content from the likes of YouTube that downloads very fast is smooth and delivers excellent picture display to the 65″ screen.

The new Aldi offering is a cracker TV that has been in development for several months with Google rejecting several versions before the model that is set to go on sale this week for only $799 being finally approved for sale in Australia because it meets their strict requirements that they demand from a certified Android TV.

Out of the box this new Bauhn TV is easy to set up and one of the biggest improvements is the all new remote, it’s slim, and the raised keys are easy to navigate with.

It’s also a Bluetooth remote that eliminates the need for direct of site to the TV, this technology allows a soundbar to be placed in front of the TV without an RF signal being blocked.

Before use this remote that needs to be paired with the TV. 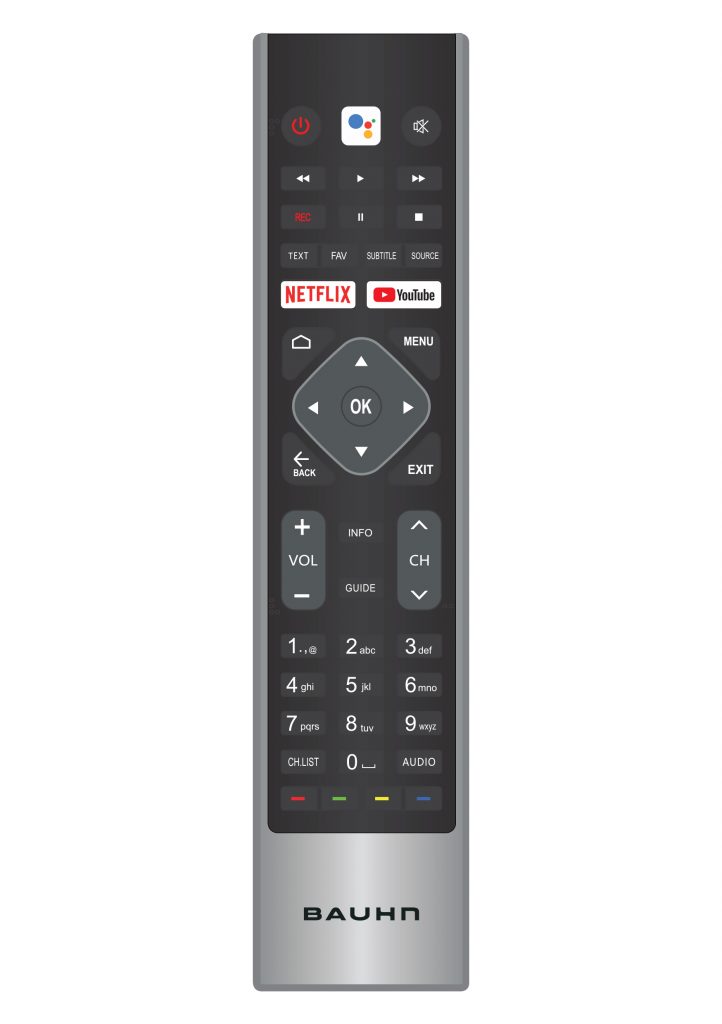 All you do is go to settings, scroll down to remote & accessories and on the bottom left hand corner of the TV you will see four dots, speak into the microphone by pressing the Google Assistant button on the remote and you should be instantly connected.

Also, the remote is instant Netflix as well as easy access to YouTube but you do need to log the TV into your Google and Netflix accounts to activate these services, it’s easy and only takes a few minutes to set up.

Also make sure you have logged into a broadband wireless or you have an Ethernet cable connected to this TV as it will automatically check for any upgrades.

What you will notice is that navigating from apps to YouTube to content such as Red Bull TV or Netflix is fast and smooth.

We attached a 24bit soundbar to this TV and within seconds we accessed a 4K 24-bit video via YouTube, the sound and the vision was excellent.

We then ran a variety of 4K video’s complete with HDR content.

We also attached a Fetch TV box on HDMI 1 and by simply saying ‘Go to HDMI 1″ the Google Assistant was able to easily switch content sources.

For the money this TV delivers exceptional value, the display is excellent and as good as TV’s twice or three times the price.

The Sony X8000G 65″ 4K UHD Android LED TV, does not have Google Assistant built in on the remote it will set you back $1,695 which the LG TV which does not have Android TV built in but has a Web OS smart TV interface and the same Google Assistant as the new Bauhn 65″ TV will cost you $2,295 though it does come with the all-new 2019 Alpha 7 processor.

From corner to corner this TV is 165cm so you have a lot of display real estate, the blacks are black, and the colours are rich, the resolution in 4K or Ultra High Definition allows you to see real detail in skin colours and action shots.

Another big plus is that you can easily download apps such as Stan direct from the Google Playstore along with content apps such as iView and the SBS app.

For an outlay of just $798 you get the same smart feature sets as those found on a top end Sony Android TV plus the added advantage of Google Voice Assistant. This is half if not a third of the price you will pay for a genuine Google approved Android TV. In addition, you have the backing of Aldi if anything does go wrong. This is a win win, all round, quality TV, smart features and the backing of a leading retailer.