Hi-Fi purists have long touted the supreme audio quality of traditional vinyl records and as a new generation of sound enthusiasts go hunting for premium audio quality sales of record players are taking off.

But how do they stack up when compared to streamed content?

We found out when we reviewed the all new Pro-Ject Juke Box E System, a combination offering that overcomes a problem for consumers demanding speakers or output from their turntable purchase.

The big plus with this system is that it has Bluetooth capability built-in and this allows for a real test of the difference between good old fashioned vinyl and today’s streamed content from the likes of Apple Music and Spotify.

The winner in this shoot-out between good old fashioned vinyl and streamed content was… we will tell you that later.

Adding to the mystique around the birth of this combo, which consists of two high quality speakers and the turntable with its unique Bluetooth capability, is the fact that the product being sold at JB Hi-Fi with a recommended retail price of $1,199 is built by the world’s largest maker of turntables.

JB Hi–Fi jumped into this product because the traditional requirement for turntable output consisted of preamps and amplifiers as well as a receiver, which served as something of a gatekeeper for more casual listeners looking to dip their toe in the water but not wanting all the gear associated with a top end Hi–Fi solution.

The Juke Box E provides a charmingly retro return to the secondary function of a sound system as a piece of home décor, while also providing the same depth of choice as yesteryear’s mini hi-fi systems, and today’s wireless streaming.

In a way it feels almost like this is what hi-fi has been building to this whole time, as though decades of technology and evolution has now been distilled down to the purest mixture of aesthetics, quality, and convenience. 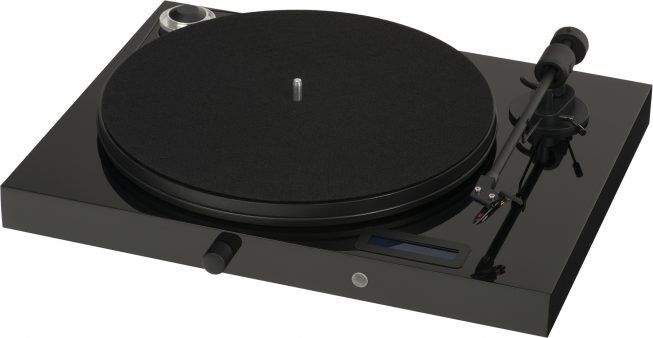 The Juke Box E nails the design for a system like this, with a clean and sleek approach.

Part of the joy of a record player is being able to watch the vinyl spin as it plays, and the minimalist design of the Juke Box E makes that the main focus, though Pro-Ject would have done well to include a direct drive turntable rather than a belt-driven one.

This would make for even more streamlined aesthetics and would also eliminate belt-related annoyances.

During initial setup the included silicon belt provided some struggle to fit on, and a lack of grooving on the platter meant the belt occasionally rolls off when changing records or RPM.

In terms of control, much of it is handled by a single wheel on the front of the system.

Clicking turns the system on and cycles through inputs while turning controls volume.

The included remote gives some expanded control over treble, bass and loudness settings.

Unfortunately, the sensor for this remote is hardly discreet visually as it is light grey on a glossy black surface.

It sticks out noticeably on the glossy red and white options too, which takes a little shine off the aesthetics.

Pro-Ject might do well to take all the shine off and add a matte colour option for those who want it. 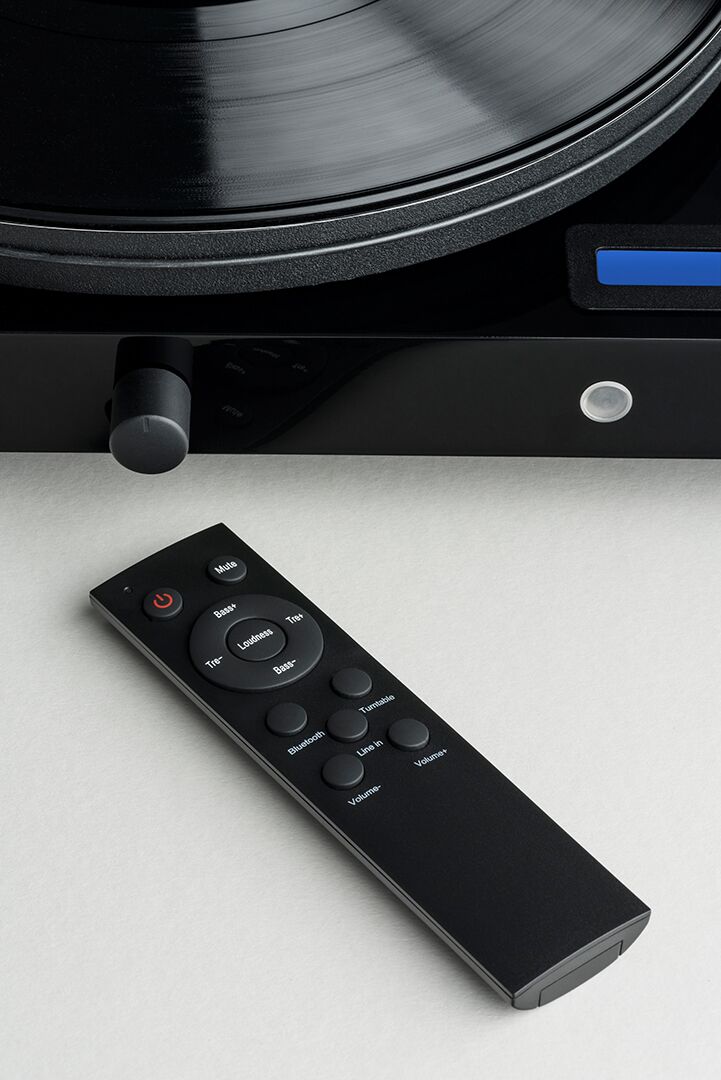 Remote sensor aside, there are a couple of other foibles and strange decisions in the design department.

In addition to a power button on the remote and click wheel, there is also a main power switch under the front edge of the Juke Box E, and an additional switch for the turntable itself.

Having to turn the turntable on rather than it switching on automatically when the turntable input is selected is mildly annoying, but it also means the turntable will keep spinning even if the system is turned off through any means other than the main power switch.

An auto-off feature on record completion or even turning off the turntable with the system wouldn’t go astray.

Our best theory for why Pro-Ject has opted for this route would be to allow the Juke Box E to be used as only a turntable and connected to an external amplifier, which provides both an upgrade path for those moving deeper into vinyl and something of an insurance policy in case the amplifier fails in the future.

The sound quality of the Juke Box E will obviously vary depending on the speakers it’s paired with.

For review purposes we’ve tested with a pair of Pro-Ject Speaker Box 5, which are included in a bundle sold at JB Hi-Fi and other retailers.

On these speakers the Juke Box E provides crisp and deep audio, especially on vinyl records, where the difference between the analogue and digital really comes to the fore.

Having been used to digital streaming quality and largely sceptical on the claims of analogue superiority I was surprised and to be honest, a little miffed after hearing the same song played on an old vinyl record and streamed via Bluetooth.

The difference is immediately noticeable.

The vinyl rendition has a presence, a sense of space and liveliness.

Playing with the bass and treble settings on the system improved things a little, but it was nowhere near the same.

Sadly, I fear my enjoyment of digital music won’t quite be either.

The Bluetooth functionality of the Juke Box E, though not producing the same quality and enjoyment, gets the job done fine enough.

Initially there were problems with connecting, but this likely has more to do with an over–abundance of nearby Bluetooth devices in an office setting and is less likely to occur in the average home.

When connection kinks were ironed out the stream remained steady over a sizeable range, likely helped by the included antenna.

This antenna can be swivelled out of sight when not in use to avoid obscuring the aesthetics.

One knock on the Bluetooth is that the connection will be interrupted if the input is switched on the Juke Box E, meaning you can’t easily switch back and forth from Bluetooth to Line-In to Turntable without it needing to reconnect.

I’d recommend future iterations of the Juke Box E add Wi-Fi integration and built-in streaming, but Bluetooth will do for now. 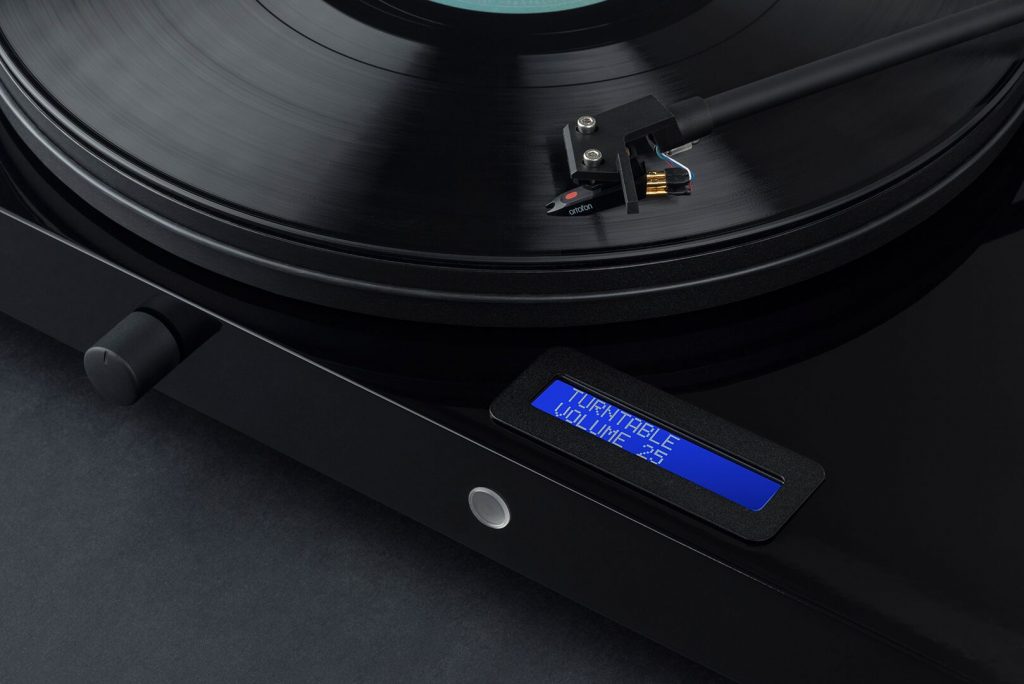 Despite turntables having existed for decades, Pro-Ject actually has few competitors in the integrated turntable market, particularly at this price point.

Many integrated turntable systems fall into the area of cheap-and-nasty, using tinny built-in speakers and being marketed on aesthetic rather than quality.

There are a handful of high-quality turntables offering output to powered speakers, whether by in-built pre-amp or Bluetooth.

McIntosh make an integrated turntable with in-built amplification and output to passive speakers, but it comes with a McIntosh price tag that puts it out of reach of most vinyl newcomers.

What’s more, the $1,199 price of the Juke Box E bundle ($799 on its own) places it nicely in the neighbourhood of high-end consumer mini hi-fi systems and introductory audiophile models, and its presence in JB Hi-Fi puts it on the same shelves as them too.

While many of these mini and micro hi-fi set-ups will include CD players, the inclusion of vinyl on the Juke Box E is a real point of difference in both audio quality and aesthetics.

The Juke Box E is much prettier than many of its competitors in this field, supports the lusted-after analogue format others don’t offer, and is cheaper than many of them too. 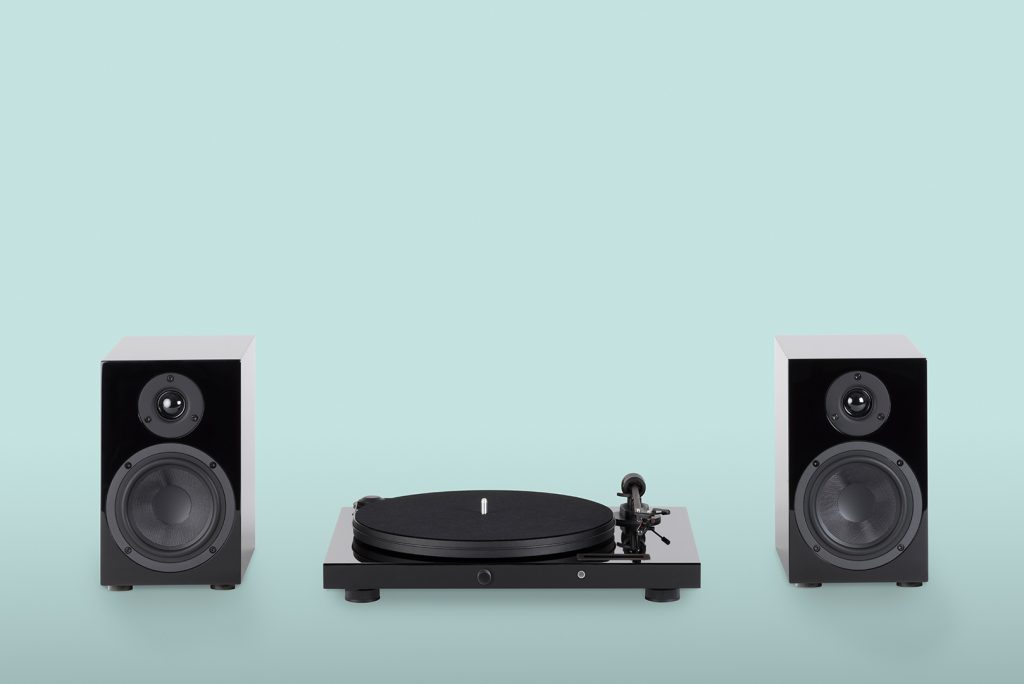 The Pro-Ject Juke Box E is a seriously good piece of kit, unusual and surprising, but relatively easy to set up and a joy to use.

It’s the kind of audio equipment you want in your house: a conversation piece that looks good turned off and sounds great turned on, and it won’t break the bank in doing it.

Pro-Ject have done well in identifying (or perhaps just rediscovering) what could be a sizeable niche in the market, and it’s placed itself at the front of the pack.

Now to see if anyone tries to overtake them. 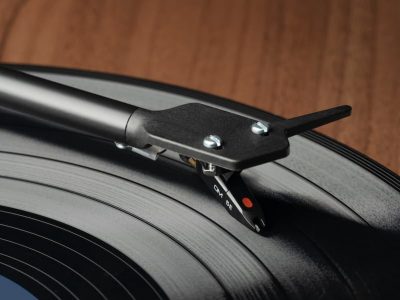