REVIEW: Logitech K600 A New TV Keyboard That’s Ahead of Its Time

An all-new $99 Logitech K600 keyboard has just gone on sale and what’s different is that this keyboard is more for couch potatoes who want to manage their TV’s while also being able to bang out a quick email or website URL or navigate between connected boxes.

There is no doubt that this product makes typing out search terms and passwords a whole lot easier, there is also a built-in trackpad and TV navigation buttons but for it to work like it is designed, you have to have the right TV.

To set up the keyboard, all you have to do is navigate to the Logitech’s K600 website,

This is an excellent site that is easy to navigate.

All you do is select your TV operating system, then hold the Function and number key combo that appears on the screen. You have an abundance of TV choices from LG Web OS TV’s to Chrome TV’s to Samsung Tizen TVs to Philips Android TV’s as well as MacOS, ChromeOS, iOS, and Windows-based TVs.

A tiny light on the keyboard will let you know that it’s mapped the appropriate shortcut keys.

In the box is a USB dongle for connecting wirelessly to most devices, and while you can also connect the keyboard over Bluetooth, Logitech discourages you from doing so.

If you do want to connect via Bluetooth what you do is press and hold any of the three number buttons at the top of the keyboard to begin pairing.

You can pair or map up to three devices with the keyboard at once, and then easily switch between them using those number keys.

This is the same process I use on my Logitech Craft desktop keyboard which I use to toggle between my PC, smartphone and tablet.

As for the K600 keyboard, it has a row of navigation buttons on the left for the most frequently used TV functions such as home, back, menu, and search, along with left- and right mouse-click buttons.

On the right side, there’s a directional pad with a select button in the centre plus a circular trackpad that supports both tapping and clicking.

What you will notice is that this trackpad introduces a whole new capability for a keyboard and it may take you a while to get used to it as you have to navigate with your thumbs.

To toggle between the menus on a smart TV I would ideally like to have seen some form of trackball instead of having to use two fingers to scroll up and down.

you can also use the arrow keys or directional pad to navigate.

Also, on board are excellent volume keys and a power button for turning a TV on and off, these work with the built-in functions of whatever TV you’re controlling.

On the negative side, this is a much clunkier device overall than the small but well-designed remote controls that come with for example a Samsung or LG TV remote which also has voice control built in.

Netflix’s Android TV app, for instance, does not respond to trackpad input, and several Android TV apps fail to recognise the Enter key as a way to submit login information.

Instead, they would re-enter the previously-typed letter, because the on-screen cursor had moved to that letter after pressing the corresponding key. 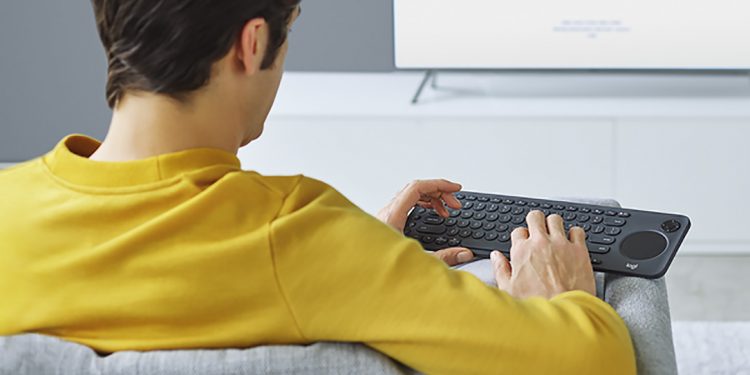 This keyboard is an interesting exercise while the concept is great, and the keyboard well designed Logitech is in the hands of the TV brands and the developers of operating systems for TV’s and this is where there is an in a pass.

While the keyboard has an excellent array of capabilities they all come to nought if they don’t work with certain TV functions.

If a major brand was smart they should work with Logitech get all; the keys working and then bundle the Logitech keyboard in with the TV, I am sure that a lot of consumers would go for this TV because of the added value of the keyboard.