OLED Not Delivering Profits For LG, Despite Dominating Market

Despite being the dominant and in some cases the only supplier of OLED display screens worldwide, LG Display has reported a 91% slump in profits.

The Company that supplies OLED display screens to Sony, Panasonic and several other brands has attributed the slump to a continued decline in panel prices and growing investment in their OLED business which the Korean Company believes can be “significantly” expanded.

DigiTimes, reported that operating profit for the fourth quarter of 2017 came to KRW45 billion, down 92% sequentially and 95% on year.

Despite intensified global competition in the industry and the continued decline in panel prices that started in the second half of 2017, LG Display said it achieved a record-high annual operating profit of KRW 2.5 trillion by expanding the portion of differentiated products such as large-size UHD TV panels as well as high-resolution and high-end IT panels.

LG Display said its OLED business saw its annual TV panel shipments increase to 1.7 million units by achieving stable productivity as well as expanding its customer base in the large-size OLED business. The company also started operation at its E5 production line, which produces small and mid-size OLED panels.

But the OLED expansion is partly to blame for its poor profitability in the fourth quarter.

“LG Display registered KRW7,126 billion in revenues in the fourth quarter of 2017, a quarter-on-quarter increase of 2% thanks to increased shipments of large-size LCD panels and OLED panels for TVs backed by seasonality,” said the panel maker in a press statement. “The operating profit of LG Display in the fourth quarter decreased by 95% year-on-year and by 92% quarter-on-quarter due to the continued decline in prices and an unfavourable foreign exchange rate, as well as pre-emptive expenses in marketing and R&D for OLED business expansion in 2018 and some one-off expenses.”

According to the company, panels for TVs accounted for 40% of revenues in the fourth quarter of 2017, mobile devices for 28%, tablets and notebook PCs for 18%, and desktop monitors for 14%. 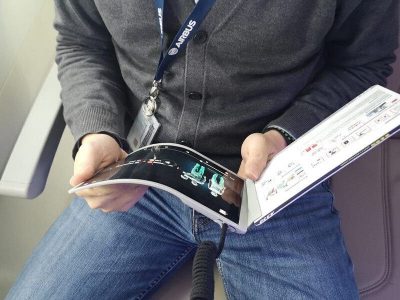 LG Display To Spend $1.2B On Dedicated Apple OLED Line