The Bluesound 24bit Soundbar which is distributed by Sydney based Convoy, is facing a rough ride following the release of the new Sennheiser AMBEO 3D soundbar which is set to be sold by many of the same specialist Hi Fi dealers currently selling the Bluesound offering.

Prior to the launch of the new 3D AMBEO soundbar the Bluesound offering was seen as a premium 24Bit offering, however the combination of the Sennheiser name, marketing clout and new audio technology is set to put pressure on the Canadian brand.

Retailers claim that the big difference is that the Sennheiser brand is well known and according to several Bluesound dealers that ChannelNews has spoken to it will deliver “higher profit margin” as it will retail for $3,999 Vs $1,699 for the Bluesound offering.

Tipped to be a popular soundbar the new Sennheiser offering has attracted excellent reviews in Europe, with retailers set to benefit from the association with premium headphones. Sennheiser also have their own store in Sydney where the product can be demonstrated.

Unlike the Denon HEOS 24-bit soundbar which is sold by Melbourne based Qualifi, Convoy does not have mass distribution revenue to support their 24bit offering.

According to the former CEO of Convoy Geoff Mathews, Convoy was stopped from offering the product to mass retailers by the Canadian owners Lenbrook Industries Limited, this restricted the potential revenue that archrival Qualifi  is now generating with the Denon Heos offering outselling Bluesound by more than 4 to one.

Currently the Denon HEOS soundbar is sold by both Harvey Norman and a large percentage of the specialist dealer channel.

Vinod David at the Lifestyle Store said “It’s great to have a new soundbar of this quality hit the market. Sennheiser is a well-known brand and is trusted”.

Len Wallis the CEO of Len Wallis Audio said up until now he has been recommending the Bluesound soundbar as well as the Denon HEOS offering.

“We have just started selling the new Sennheiser AMBEO soundbar and what this product does is allow us to scope in a more expensive and excellent sounding solution into our custom install offering it also delivers a higher return”.

The new Sennheiser AMBEO has already proved to be a big hit in Europe in the specialist channel with several retailers telling ChannelNews that consumers who are now paying $8K -$10K for a premium TV are quite prepared to pay for the new Sennheiser offering.

According to Len Wallis one of the issues associated with the new Sennheiser offering is that the system is large and “really needs to be configured with a wall mounted TV Vs a TV sitting on a cabinet” as the RF sensor of many TV are located on the bottom of the TV and the AMBEO 3D which is quite high blocks the sensor.

Due to hit stores in Australia this week the soundbar is a major move away from Sennheiser’s traditional products headphones.

ChannelNews has have played with this device on three occasions now and its real cracker despite the fact that it’s big and at $3,999 among the most expensive sound bars currently on sale in Australia, it’s now the best soundbar we have seen for some time.

With the simple press of an AMBEO button on the remote one is instantly in another sound world when compared with the likes of Bluesound for the simple reason that it has four, rather than two, height channels that seriously push the boundaries of what Dolby Atmos soundbars are capable of.

Inside this big box and it is big at 13 drivers (six woofers, five tweeters, and two top-firing speakers) and the back with a small LCD screen in the centre showing the current settings, also built in is Chromecast, Bluetooth and HDMI eARC/CEC, there is no Apple AirPlay.

The AMBEO supports Dolby Atmos, DTS:X and MPEG-H which is a 3D audio standard.

Using Upmix Technology, the Soundbar can also recreate stereo and 5.1 content in 3D.

Who Has The Greatest Sounding Speakers? Best Of Best Awards Announced 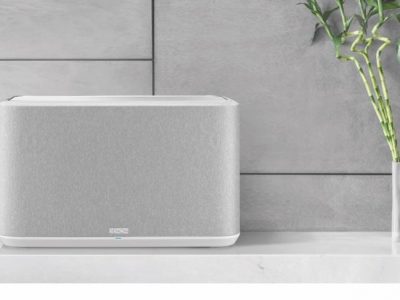