Home > Latest News > LG Joins The Premier League, But Will They Score With V30+?

LG Joins The Premier League, But Will They Score With V30+?

LG believes they are playing in the smartphone ‘premier league’ with their new V30+ smartphone, which while having excellent specs, is carrying baggage – largely because it is manufactured by LG, who doesn’t have the brand clout of Apple and Samsung, which it perceives to be playing alongside.

Priced at $1,199 the V30+ is notably cheaper than Samsung’s Galaxy Note 8 ($1,499) and the all-new iPhone X ($1,579). Whilst the smartphone is heralded one of the best phones out there, problem is, the device’s price and its brand image don’t marry well together.

The device will be available to purchase at JB Hi-Fi from November 16th.

The company’s next issue concerns both Samsung and Apple spending millions of dollars marketing their premier league phones, as opposed to the method in which LG goes to market, primarily based on retailer advertising and marketing.

LG is currently offering a complimentary set of Beoplay H3 earphones (RRP $230) for customers who purchase the V30+ smartphone from JB Hi-Fi, between November 16th and December 24th.

Spec for spec, LG’s V30+ is up there, and has successfully attracted rave reviews globally – its OLED screen, wafer thin design, and 128GB ROM and 4GB of RAM, gives it the clout needed to compete in a competitive marketplace.

LG Australia’s Marketing Manager for Mobile, Bruce Leigh, claims that the V30+ is a strong contender in the marketplace, and has taken the company’s smartphone offering to the next level:

“The LG V30+ is an extremely strong contender in the current smartphone market. It offers incredible photography and audio capabilities paired with an immersive OLED display to create a really well-rounded smartphone”

“It is the newest addition to our FullVision display family, joining the LG Q6 ($399RRP) and LG G6 ($799RRP) which both have an existing focus on providing a phone with more to see and less to hold. We’ve really taken our mobile offering to the next level”. 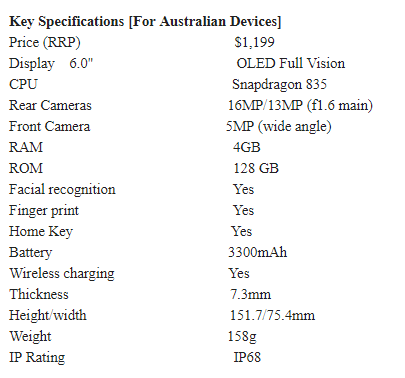