Internal Spat Boils Over At Electrolux, After CEO With Limited Appliance Experience Appointed

It has taken six months for John Featherstone who late last year was appointed CEO of Electrolux to have a falling out with the man who many in the Swedish appliance Company claim should have got the top job.

Electrolux Sales Director Michael Doyle one of the most experence appliance and consumer electronics executives has told collegues that he refused to go along with Featherstone demands resulting in him suddenly quitting Electrolux.

In his last job Featherstone spearheaded the demise of Sony from the mobile market in Australia despite several industry executives such as Sam Skontos the CEO of TCL Mobile claiming that Sony should have had a “bright future in the Australian market”. Featherstone was appointed despite him having limited appliance industry experience having worked in the past for Sony Mobile, SanDisk as a sales executive, IBM and Telstra.

Early in his career he worked for a Melbourne based phone Company but quit complaining to ITNews at the time about the performance of the business.

Doyle, the former head of sales at LG Electronics has benn described by both retailers and former collegues as an “excellent” executive whose skill set was “superior to that of Fetherstone”.

Several retailers who ChannelNews has spoken to are upset at the exit of Doyle with one senior director of a major retail group telling ChannelNews that “Featherstone has one tenth of the experiencr” that Doyle has in the appliance channel. “Featherstone is a lightweight and in his last role he ended up closing down the Sony mobile operation” said a former Electrolux executive who has worked with Doyle in a prior job.

Having worked for both Panasonic and Hitachi Doyle was highly respected and was appointed head of Electrolux and acting general manager, pending the appointment of a successor to former Electrolux Home Products Australia and New Zealand managing director, Mike Putt, who quit Electrolux after 18 years because overseas management wanted him to sack staff who he had worked for for several years.

Electrolux senior vice president APAC/MEA, Adam Cich has not explained what experience Featherstone delivered in the appliance market over the likes of Doyle when they appointed him into the top job.

He has also not commented on the loss of Doyle from the Company.

The Electrolux refrigerators were manufactured in Thailand and shipped to Australia and what’s known at this stage is whether any goods shipped previously had larva from the dreaded Khapra Beetle inside boxes or the actual product themselves.

Electrolux, John Featherstone, Michael Doyle
You may also like 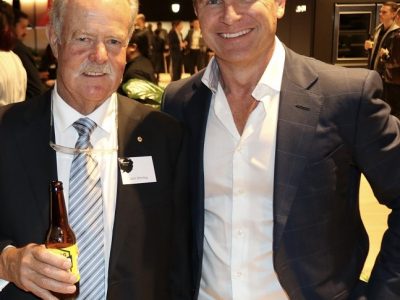 Cyberpunk Back On PS Store As Oz Retailers Slash Price
Console Gaming Gaming Software
//
Jake Nelson
/
Comments are Off
Cyberpunk 2077 is back on the PlayStation Store, despite the PS4 version – which is still on the shelves at... Read More