Intel, the world’s biggest chipmaker, has reported slower growth in its server-chip division, creating concern that the company’s most profitable business won’t be able to make up for weaknesses in the personal computer market.

The result comes as the company books US$1.41 billion (A$1.88 billon) in charges during the quarter after it slashed 12,000 jobs and sent Intel’s quarterly profit down 51 percent. Q2 net income fell to $1.3 billion from $2.71 billion a year earlier.

Its datacentre group revenue was $4 billion in the second quarter, up 5 percent from a year earlier, but third quarter revenue was below the company’s target level.

It was also the second quarter that growth, in that unit, has fallen below 10 percent.

The client computing group, which supplies more than 80 percent of processors used by the PC industry, had revenue of $7.3 billion, down three percent from a year earlier. This unit generated an operating profit of $1.9 billion.

Under CEO Brian Krzanich, Intel is trying to find new uses for its processors as the PC market, its longtime main source of revenue, suffers a fifth straight year of shrinking sales.

Krzanich told analysts he expects the PC market to decline in the “high-single-digit” range this year, but that should be offset by double-digit growth from other businesses. “While we remain cautious on the PC market, we’re forecasting growth in 2016 built on strength in data center, the Internet of Things and programmable solutions,” he said. 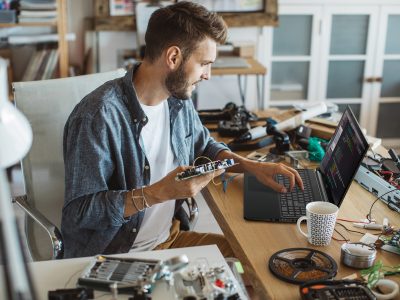