According to sources Voxx International and Sharp have failed to sign on the dotted line of the contract to acquire the struggling Japanese business.

A deal was supposed to be concluded back on May 20, 2021 but according to insiders the US Company who has a reputation for being disloyal have not signed the original agreement with the possibility that Onkyo is now talking to other interested parties.

The interim original agreement was to be replaced with a definitive agreement containing all of the final terms and conditions of the final sale transferring the Onkyo A/V division to a new partnership consisting of Sharp and VOXX. But instead Onkyo has now put out a statement saying the deal has changed.

Several analysts had reservations about the deal due to the high level of debt associated with the insolvency hit Onkyo who recently reported a global revenue decline of 49.3% in its fiscal year 2020 with a record net loss of over $90 million (from FY 2019).

The Tokyo Stock Exchange gave Onkyo a limited window of time to get itself together or be delisted from the JASDAQ stock exchange.

Onkyo who has had three previous deals fall apart, released a statement last week claiming “Although discussions on the transfer of this business (Onkyo Home Entertainment) are proceeding smoothly, confirmation by the three companies continues in the final adjustment part. Since it has been done, we have decided to change the scheduled conclusion date that was disclosed.

“The scheduled date for concluding a formal contract that stipulated the final details and conditions of this transfer shall be ‘May 20, 2021 (scheduled).’ However, it has [now] been changed to ‘late May 2021 (scheduled)’ and will be disclosed as soon as it is confirmed.”

The big question now is whether the risks associated with Onkyo is going to rise up to derail the deal with Sharp and Voxx International.

Archrival Sound United took one look at Onkyo and the associated Pioneer business and walked away.

In the latest talks it appears to be the detailed negotiations of the risks associated with taking on tens of millions in debt that is causing the delay.

One observer wrote “I believe that Onkyo remains what dealmakers like to call, “a motivated seller.” But Onkyo has been at the altar three times before…only to see it slip away for different reasons”.

With its shares likely to be removed from the TSE around July, Onkyo “began considering all possible options for maintaining business continuity,” the company said in their announcement of the Voxx International Sharp deal.
Onkyo described Sharp and Voxx as “suitable” partners with which it has collaborated in audio equipment before.

The company said it aimed to reach a formal agreement that sets the terms of the deal by May 20.

A Sharp spokesperson confirmed that the company is considering the Onkyo proposal. What’s not known is who will wear the bulk of the Onkyo debt.

Selling its audio business, which accounted for 53% of total sales in the year ended March 2020, would leave Onkyo with no clear substitute in terms of earnings potential.
Besides making its own products, Onkyo is also a player in original equipment manufacturing (OEM), assembling television speakers and other devices for other brands.

When the company announced plans to sell its audio-visual business to Sound United in May 2019, CEO Munenori Otsuki said Onkyo would seek growth in OEM. Talks broke down in October after the two sides failed to agree on the terms of the deal. The announced sale price was about 8 billion yen ($73 million at current rates).

More failures followed. Onkyo sank to a negative net worth of 3.3 billion yen in the year ended March 2020. It sought a capital injection from an overseas investment fund but was unsuccessful. Onkyo remained mired in negative net worth for a second straight fiscal year, a violation of the TSE’s listing rules.

Klipsch, Onkyo, sharp, voxx international
You may also like 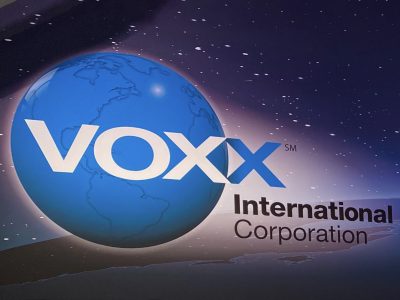