Winnings, better known for appliances is diversifying into software after earlier this year investing in connected home instalations.

Winning Group boss John Winning has said that he has invested millions into the development of an employee engagement tool which prompts employees to complete 30-second weekly check-ins on their happiness at work and lets them keep track of their goals and achievements at work.

The CEO  told the Financial Review that Heelix had come about after he acquired a start-up called JobVibe and then spent about $2 million investing in the platform.
Recently Winning diversified into the connected home market.

Winning told the AFR “It’s taken on legs since then and we’ve realised there’s a major gap in the market for this. No one really knows how to check if their team is engaged,” he said.

“The larger the organisation gets, the more disconnected and less close they get.”

The creation of Heelix came about due to a twist of fate, with Mr Winning meeting JobVibe co-founder Tim Mullen in the lift of his Sydney office.

Mr Mullen pitched Mr Winning the idea for his business and the concept immediately appealed to Mr Winning, who likes to track every data point he can in his company.

He liked that the product could give him weekly updates on his teams, rather than relying on annual or bi-annual staff engagement surveys, which were easily influenced by the time of the year in which they were conducted.

“I’m generally not a fan of external software businesses because I like to own all of that IP in-house and I don’t like licensing fees,” he said.

The Heelix platform is already being used monthly by 80 per cent of Winning Group staff. 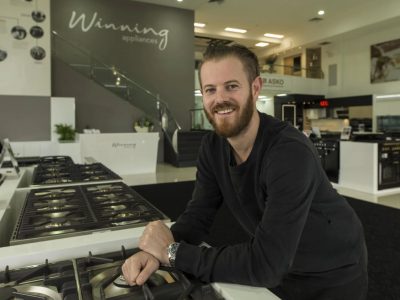